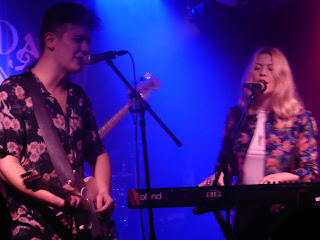 Friday night saw Cosmo Calling launch their debut single On The Wire to a packed out Night And Day in Manchester. As well as the single the five-piece demonstrated that they could very quickly become a force to be reckoned with and appeal to a very broad spectrum of people with immaculately constructed songs and the rich combination of Phoebe and Harry's vocals to create a sound that no one around town is close to at the moment.

Cosmo Calling's ten song set gets a rapturous reception from a crowd made up of all ages and that's a nod to the fact that they're creating something that has the potential for mass appeal. The Beautiful South comparisons they'll get will be inevitable of course with the male / female dual vocal approach that they take to most of the songs, but they will only ever scratch the surface of what Cosmo Calling are really about.

The songs skip from style to style with breathless ease and it's very clear that the band have a deep knowledgeable musical background and pedigree, but also a very clever ear for a great pop song too, albeit it one that runs deeper than a three minute hit and run. On The Wire is saved for close to the end, but unlike many bands they simply haven't picked their best song and released it first as most of this set could quite easily have taken up that mantle and been equally impressive for a new band's first shot. 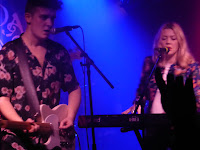 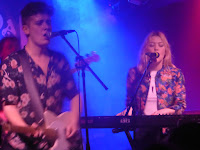 From the opening Shake My Soul through to a gloriously upbeat and earworm Sugar that finishes off the night and leaves them to soak in the rousing reception they get, each song has a style of its own yet a very definitive Cosmo Calling sound in the way that the bands that make a breakthrough always do. Black Trousers and Under The Gun, two highlights of the set towards the end, are a case in point and it's telling that they hold the audience's attention in the quieter moments as well as when they let loose. They seem well versed too in audience participation, always encouraging them to get involved and engaging between songs, even getting everyone to sing Happy Birthday to one friend in the audience.

Cosmo Calling are a genuinely interesting proposition. They seem a little out of place in a small venue and they'll be a nightmare for promoters who want to team them up with similar sounding bands because there really aren't any around at the moment in the city, but that shouldn't be a problem for long because they've got the potential to fill venues many times this size over and over again and, more crucially, they've got the songs and the ability to back that up.