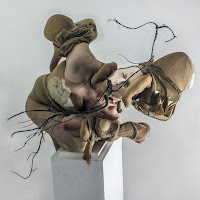 A new release on the acclaimed Sonic Cathedral label can mean only one thing - a masterpiece. Stuart Ralston has a listen to the second long player from Spectres and isn't disappointed.

Much like the legendary Factory label in the 1980s, a release under the Sonic Cathedral label is a hallmark of quality. The listener knows the label have a high standard. Condition is the exhilarating second album from Spectres recorded by Dominic Mitchison in the band’s adopted home city of Bristol and mastered by Frank Arkwright, who has previously worked his magic on Mogwai and 65daysofstatic, at Abbey Road in London.

Opening with The Beginning Of An End, it's clear that Spectres - Joe Hatt (vocals, guitar), Adrian Dutt (guitar), Darren Frost (bass) and Andy Came (drums) mean business. The Beginning Of An End is like a call to arms. A simple, yet symphonic opening Spectres are charting territory somewhere between Closer era Joy Division and My Bloody Valentine. Rubber Plant ups the tempo and I suspect it will be a real highlight of their live show. Dissolve - the first single to be taken from the album - is much more left field. Neck rattles along at great speed and is reminiscent of 80s hardcore like Fugazi and Black Flag.

In stark contrast to its predecessor, A Fish Called Wanda is the most mellow moment of the nine tracks presented here. Held together by a pulsating rhythm section, it shows the softer side of Spectres yet retains the big, powerful, demanding sound we have come to expect from them. My pick of the album so far.

“There were discussions about experimenting with electronics, but the idea soon petered out when we realised we still wanted to experiment with guitars,” reveals singer and guitarist Joe Hatt. “On this album we became even less interested in actually playing guitar,” added Hatt, “which meant that we got more into experimenting with the sounds we could get out of them when brutalising them and letting the feedback do the talking.” This approach is evident on Welcoming The Flowers, which is another big, ambitious slab of post-rock. The industrial dance infused End Waltz shows another side to Spectres completely, and is almost techno influence before the infectious Coping Mechanism brings the album to a close.

In Condition, Spectres have continued to set themselves​ high standards, making a record on their own terms. It's a record that demands your attention, with production values are second to none.

Email ThisBlogThis!Share to TwitterShare to FacebookShare to Pinterest
Labels: Spectres