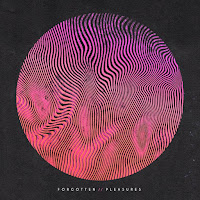 "They say I'm no good, but I've never been better"

Findlay's debut album Forgotten Pleasures has been a long time coming, but the thirteen track collection is more than worth the wait. It's crammed full of the bold, confident and self-assured songs you'd expect from her sporadic live shows and much more.

It's nine long years since we were alerted to the talents of a teenage singer songwriter called Natalie Findlay via her myspace demos and were initially shocked by the reinvention by the time she released debut single Your Sister in 2012. Since then she's built up an impressive set of singles - Off And On, Greasy Love, Junk Food, Wolf Back (the only one not included here), Electric Bones and Waste My Time and the album follows in that rich vein of incorporating many diverse strands and styles and combining them into something quite potent and unique.

The singles are a good entry point for the curious. Recent single Waste My Time declares "They say I'm no good but I've never been better" as a defiant two finger salute. Greasy Love is a shameless celebration of hot and sweaty sex ("I'm tired of being good...") and not feeling guilty about it. Junk Food a scything criticism of the body beautiful culture thrust upon young women. Off And On is still as imposing and dramatic as it builds and threatens to career out of control yet thrills by living on the edge whilst Electric Bones leaves us with the simple message that "I'm just a girl with a microphone."

There's much more depth to the record though. Monomania, sitting in amidst the singles, shows a softer more vulnerable side ("nobody loves you like I do") wrapped in some delicious vocal harmonies whilst there's a defiance in Wild And Unwise ("if you're not going to call me by my name, don't call me all the time"). The title track is a claustrophobic brooding piece where Findlay's voice wraps itself around the electronic clouds of sound to unnerving dramatic effect that changes the mood of the album for four minutes and We Are Never The Last has a joyful summery feel to it that reveals yet another side to the record. St Elmo's Fire thankfully (or disappointingly) isn't a cover, but a revelatory tender moment of reflection ("sometimes it only takes a kiss to fix me, sometimes a little more, forgive me") set to a minimalist backing that serves just to accentuate the poignancy of the words.

The album finishes with Sunday Morning In The Afternoon where a solitary piano and voice make up most of the song including some beautiful haunting effects on Natalie's voice making the song feel like a comedown from the night before until it explodes into glorious life two minutes from the end like an epiphany.

Forbidden Pleasures is an astonishing record under any circumstances. When you consider its difficult birth and the way it's sort of sneaked out in the UK, it's an even more impressive achievement. It's a record that should be coming out to a huge fanfare for one of the country's most diverse talented and exciting artists because that's the level Forbidden Pleasures operates at.