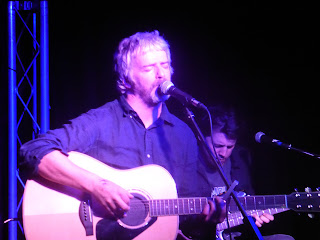 Ahead of the release of his debut solo album Leave Alone The Empty Spaces this year, John Bramwell is back on the road in the delightful surroundings of Wigan Old Courts playing old favourites from the I Am Kloot back catalogue as well as road-testing new songs with the assistance of Dave and Andy Fidler on guitar, bass and cajon. Dave also played an opening set that featured songs from his debut album I'm Not Here and some new tracks from the follow-up that he's in the process of recording.

The Old Courts has finally given Wigan a venue to be proud of, a not-for-profit arts centre in the middle of town with the ambition to attract artists of John's standing and also support local bands, four of whom play down in the basement later that evening. An excellent stage and sound set up, decent bar prices and friendly staff will hopefully make it a more regular calling off point for bands and reignite the music scene locally.

Dave opens his set with a couple of tracks from I'm Not Here, the title track and Easy Gone, Easy Come and he benefits from the crystal clear sound in the room and the fact that the bar is in a different room so the talkers are in there and those in the hall are mostly paying attention and giving him the respect he deserves. His brother Andy joins him for two new songs, one untitled (possibly called Maria or Heart Of Stone about a woman he met in a Haitian prison whilst on a humanitarian trip there) and Can't Stand It, both of which show that he's planning to expand his horizons further than the wonderful acoustic sound of his debut as he records his second album. 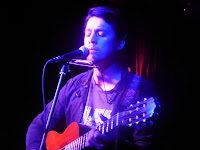 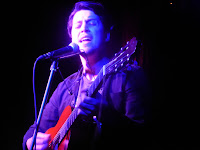 That thought is confirmed by the final two songs he plays after his dexterous instrumental tribute to Tommy Emanuel. Love Listens is one of those rare songs that makes you smile immediately, a dreamy romanticism running through it with the line "there are some things they cannot steal, money talks but love listens" feeling particular poignant. That personal feel to his songs, as evidenced in Easy Gone earlier which he explained was for his son Dylan, is also evident in his last song, the emotionally fragile and stirring Home To Me which is about his departed father. The attentive elements of the crowd give him a rapturous and well-deserved reception at the end.

John's on good form at the start of his set, joking with Dave who leaves the mic stand about a foot higher than his singing position and laughing at his reputation for kicking off and fighting his own shadow and announcing "good evening Wigan, how are you pie eaters."  He starts with From Your Favourite Sky and we can hear every little nuance in his guitar playing, superbly delicate of touch, and the world-worn voice that tells these stories of drinking and disaster. It's also his between song stories that warm the audience's hearts too, like the tale of the gig when he fell off the stage before playing a note and broke his guitar or when he mishears someone shout about Ed Sheeran and thinks it was about him taking a shit on him.

The beautiful To The Brink calls for audience participation as we're asked to sing the accordian part and the response almost makes John crease with laughter such is the gusto in which they respond, possibly due to the easy access to the bar area that sees people regularly going out to top up. One guy brings John a drink back and asks for Not A Reasonable Man, so John changes his setlist and plays it, dangerous as it leads to a spate of requests for songs he hasn't played for a long time which he bats back with good humour like "you want me to do Twist for a Jagerbomb, or the twist?" and that he ripped off one of his own songs, This House Is Haunted, when he wrote Bullets. 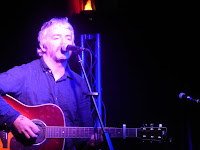 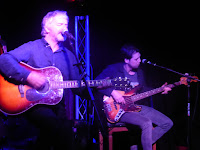 The solo set covers most of Kloot's back catalogue from the aforementioned Bullets, back through Bigger Wheels and 86 TVs from their Natural History debut, touching on I Believe, Over My Shoulder and a tender I Still Do and later on Masquerade as well as crowd pleasers Northern Skies and the traditional set closer Proof.

But before that there's five new songs - Days Go By, Get Away From This, Leave Alone The Empty Spaces, Who Is Anybody Anyway and Working My Mind Off - for which Dave and Andy join John on stage. It's clear that they're still working out how best to play these songs, but that in itself makes the experience far more revealing. He admits that it's difficult for the audience to concentrate for songs they've not heard and asks for patience, which he gets for the main part although he has to ask twice at one point. As you'd expect from any song that John has written, they're beautifully constructed, but there's a warmth and positivity to them that hasn't always been evident. The fact that they're still works in progress and are being tinkered with gives us an even more fascinating insight.

As Dave and Andy depart and John returns to playing on his own, things almost go awry. Alcohol has obviously started to play its part in the crowd and some fairly tanked up people down the front decide that they want to take selfies whilst John is playing Some Better Day, which understandably throws him as they're leaning over the front of the stage to do it. He starts and stops Northern Skies as a group decide their conversations are more important than the music and tells them there's a bar before quipping he now feels like Hitler to cheers from the majority. It's a shame a few self-important idiots think their inane chat is more important than the rest of the room and it's good to see an artist taking a stance against the arseholes that are more frequently than ever blighting gigs.

A John Bramwell show is always a unique experience and tonight is no exception. You're guaranteed some of the finest songwriting of the past few decades including the new material, a mix of light and dark humour that's spontaneous and off-the-cuff rather than pre-planned and a large slice of unpredictability from a man who has been refusing to play by the rules and living on his instincts ever since he started out as Johnny Dangerously three decades ago even if that means that he's risking shooting himself in the foot sometimes.