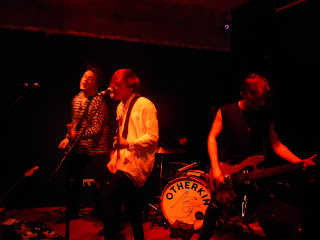 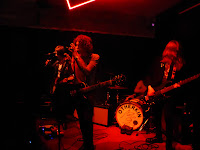 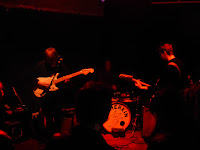 Jimmy's was host to Otherkin's second ever Manchester show on Wednesday night as the Dublin band toured in support of their new single Bad Advice. Support came from Stockport's Kashmere and St Helens' Sapho.

Sapho open up proceedings, a new young three piece from St Helens and it's clear from the outset that although the band might be new, all three of them are accomplished musicians and very much atuned to each other, often turning to face their band mates (it later transpires that the three of them played together in The Patriots).

This is a new project though, so new in fact that the lyrics to one of the songs was only completed hours earlier. Their songs take their influences from the guitar wieldling gods of years gone by, but there's also a Merseybeat element to some of their songs, On The Radio and Partners In Crime in particular. Their coup de grace though is the final song Change, a big confident rocker that ends with them letting loose impressively over an extended instrumental outro. 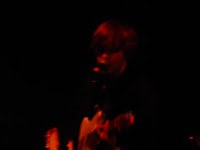 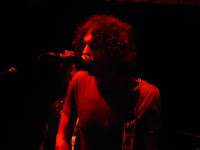 Kashmere are next up and they trade in big bold swaggering rock anthems such as previous single Porcelain and its soon-to-be-released follow-up Hoxton. Although he says he's about to lose his voice, front man Joey sounds on fine form, his powerful vocals making them stand out from the million and one four piece all male bands that are knocking around Manchester at present.

His band mates sound in fine fettle too, songs hang on huge hooks and bold confident riffs that grab the listener and their eager audience. They might lack a really stand out killer song at present, and Hoxton points to them being not too far away from delivering one, but they still impress rather than shrinking into the crowd.

Otherkin are something special though. The already thin crowd has dissipated a little more by the time they come on stage, but if they care, they don't show it as they give a performance worthy of a much bigger audience than they've got and by the end, after they've had us crouching down, clapping along and finally singing with them, they've won us all over. Luke's a non-stop bundle of energy, whether he's stood on the drums, in amongst us or jumping on to Jimmy's downstairs bar or delivering vocals with a controlled anger and passion that makes him impossible to ignore. They're set on having the best time they can and insist that we do and resistance is pretty futile. 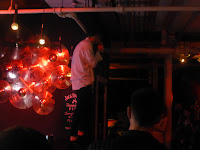 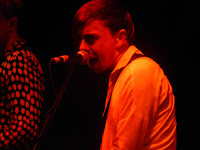 They've got the songs as well as the thrilling visual live appearance. New single Bad Advice is simply the tip of an iceberg that will form their debut album that's due to come out later in the year. There's tracks from their first two EPs scattered liberally around the set - I Was Born, Yeah I Know, Feel It and the raucous chaotic power of their final two songs Ay Ay and the magnificent Love's A Liability that bring the evening to its conclusion. There are new songs as well like React and Treat Me So Bad that scream future singles at us. Whether they'll capture the tidal wave of energy that is their live set when they come to release their album is a question for another day, but as we leave Jimmy's we're still a little stunned at just how they good they were and how they turned round a night that could have been difficult for them into one where those who attended will be going telling all their friends just what they missed.