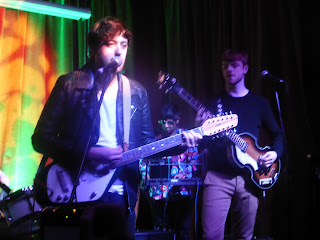 Control Of The Going celebrated the release of their stunning new single She with a gig at Gullivers in Manchester on Saturday night that revealed a set of songs that they're about to take into the studio to record their debut album, which on this basis could be one of the surprise highlights of 2017.

The transformation of Control Of The Going from the eager ragtaggle bunch of psyche wannabes a couple of years ago into a serious contender on the scene both locally and nationally has been slowly happening before our eyes for some time now.  Every gig seems to have another song added to the set that broadens their horizons further. Their new single She is a case in point, taking the latent potential in their early work such as The Message, criminally absent tonight in our opinion, and If Only and allowing it to blossom with spectacular results. It isn't even close to the best song in their set though tonight which is testament to how far they've come.

They open with two relatively new songs Sell Yourself and Family and it's immediately evident how far they've broadened their horizons. The latter is their best song yet, a certain single, a powerful thrusting riff running through it that will get stuck in your head that's perfectly in tune with Liam's rich vocal about rock and roll and its impact on the soul. It breaks out of the psyche bubble and hints at something more open, widescreen and fulfilling that ambition that's always been there. It also shows the impact Ste Ackley has had on them since joining last year - they're far tighter a unit than they were at the start, but have managed this without losing any of the thrill that runs through the heart of their music.

They haven't dispensed of all their older songs though, but have reinvented them, stretched them past their old boundaries. The likes of In Line, Wild Flower and Star feel like completely animals to their infant performances, a confidence running through all six of them and a togetherness that means the result is something far more powerful than the sum of the parts. The other new songs - Unknown, Love You More and War Crime - show a further broadening of horizons and targets and they hit them every time. At the same time they've opened themselves up to their audience as well, it no longer feels like they're playing to and for themselves, but drawing everyone else in the room in.

They also, save for Manesh's frankly disgusting multi-colour shirt, look the part now. Not trying to dress for the scene gives them a much more natural feel and it's immediately evident just how much Liam has grown into the front man role. His voice is richer than it's ever sounded before, the intonation in it adding real depth to the words he's singing and he absolutely looks the part.

The night is a complete success to a mix of friends and family and a noticeably growing audience that has packed out the room. You can hear the response they get growing with every song and watch people losing themselves in the songs and singing the older ones back. The album promises to be a real turning point and game changer for them as they become an increasingly powerful live proposition.