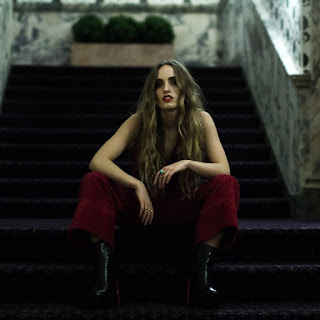 Maddy Storm is one of the most exciting new artists in Manchester at present, having won over live audiences with her captivating performances and the stunning range of her voice. She's launching her debut single To The Sun with a launch show at Jimmy's on April 2nd. We spoke to her to find out more about her, her music, her influences and her plans.

You play under the name Maddy Storm, which we understand isn't your real name, how did you choose the name and why?

It is actually my real name and I am very thankful for it; it has come in very useful.

Could you introduce the rest of the band and how you met them?

There is a constant ebb and flow to the musicians in my band, the faces you see on stage may vary from gig to gig and season to season but they are all inconceivably talented nonetheless.

The single To The Sun is out on March 27. Could you tell us a little about the song and what it's about?

The song itself is fairly ambiguous, I like to let the listener perceive their own meaning and find elements that they can relate to.

That being said; this record is, in part, about the story of Icarus. I saw the painting ‘The Sun, or the Fall of Icarus’ by Merry-Joseph Biondel and I was so in awe that I felt drawn to write about it. Alongside that concept, it is also about having a focal point to direct your gaze upon; a place of beauty that becomes a way to escape the motions of the everyday.

The songs in your live set are quite varied in style from Tempest to Water. Is that a reflection of your musical influences?

Definitely, my musical influences are very diverse from Psychedelic/Folk to Art Rock and some Soul amongst other things. I go through different phases and what I’m listening to at that time usually filters through into my writing.

You also cover The Clash's Rock The Casbah but put your own very unique spin on it. What made you choose that song?

I chose this track in particular because I always hear it whenever I’m out dancing and it has a way of making everyone feel good. I also felt like I could do something new and interesting with the song to add my own feel whilst still keeping the elements that everyone knows and loves.

The live shows you've done in Manchester have created quite a buzz about you. Has that taken you by surprise?

That is really kind of you to say. I suppose it has, I am just always really grateful for a welcoming and favourable response to the tracks that I create I guess. I really appreciate the support.

The single's out on the 27th and you've a launch gig at Jimmy's on the 2nd April. What are your plans after that?

After my single launch I have some more Manchester shows lined up; I will be supporting Bryde at The Castle Hotel on April 24th which I am really looking forward to. I also have various festivals lined up for this summer so keep an eye out for those.

And finally, how would you describe your music to someone who's never heard of you before?

I would say that it is music that sounds best in dark.

To The Sun is out now and Maddy plays Jimmy's on Sunday April 2nd.