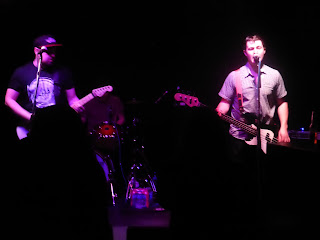 Cuecliché played their first gig since the launch of their One Last Chance EP at Liverpool's legendary Zanzibar Club on Saturday night. The London-based three-piece post-punk outfit played the EP in full to a rowdy local crowd as co-vocalist Terry was making a return back to his native Liverpool.

Live Cuecliché strip back the crisp production of the EP and head for darker rockier territory. Guitars are turned up as far as they'll go and you can hear the Blink 182 and Green Day influences they quote in their bio coming through in their sound. It's also there in the energy of the set, which never takes the foot off the accelerator pedal throughout, the band's philosophy clearly to take the crowd with them.

The EP tracks are supplemented by a couple more originals, of which Happy Hangover is the highlight, but it's the final two tracks for which the best response is reserved. They finish with Crazy Little Princess and a rougher, more aggressive take on the EP's title track. They dispense CDs to audience members seemingly at random. By the end they've won over a crowd that, save for a few mates down the front, are initially a bit too cool for school, but who get into them as the set progresses, drawn in by the songs, their delivery and Terry's between song chat.

Cuecliché play two London shows at The Good Ship on April 8th and Fiddler's Elbow on May 14th.

Email ThisBlogThis!Share to TwitterShare to FacebookShare to Pinterest
Labels: Cuecliché