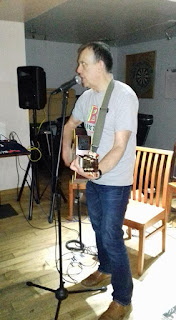 If Stuart Ralston ventures into Fife, it can mean only one thing. He's in search of Tom Hingley.

27 years on from my first encounter with Tom Hingley, I’m in the delightful Silver Birch. At the bar, their prices don't seem to have changed since then. Unfortunately I can't take advantage as I’m driving. Maybe next time. However, tonight’s set more than makes up for that as it is up there on Springsteen proportions - Tom rolls up his sleeves and plays for 3 hours! Over the course of the show, Tom touches on almost all aspects of his career - there’s some vintage and brand new solo material, modern classics courtesy of The Tom Hingley Band, stunning blues performances, a few Lovers tunes and of course some stripped back Inspiral Carpets tunes throughout the set.

Armed with just his well loved acoustic guitar, Tom Hingley turns in a vintage performance. Barely pausing for breath, he demonstrates incredible versatility as he opens by alternating some of the best known Inspirals songs with his Blues material. Stripped back, Saturn 5, Move, Directing Traffic and Dragging Me Down lose none of their appeal and demonstrate what superb songwriters Inspiral Carpets are, given that they work so well in an acoustic environment. The Blues songs sandwiched in between are in sharp contrast to the Inspirals tunes. Sometimes extended out, Hingley captivates the crowd with his heartfelt vocals and intricate guitar work.

The new material in the set tonight - some of which is drawn from his work with excellent power pop trio The Tom Hingley Band (Tom, Ste Pearce and Malc Law) - ably demonstrates the songwriting skills of Tom too and we look forward to his new album which he is currently writing and recording.

The extended set allows Tom time and scope to revisit his solo material too - he has released no fewer than five solo albums (as well as two albums with Kelly Wood and Paul & Steve Hanley in The Lovers). Of his solo songs on offer tonight, Thirst Born, from the excellent Thames Valley Delta Blues LP is the standout. It's followed by a delicate Bitches Brew and is one of several reworkings which particularly suit the acoustic arena and allow Tom’s vocals to take centre stage.

Bringing Tom’s first set to an end is This Is How It Feels which unsurprisingly gets the biggest cheer of the night and sees the locals take to the dance floor for a singalong. On the day of the 60th birthday of Mark E Smith, Hingley adds I Want You to the set. The 1994 collaboration between Smith and the Inspirals was much celebrated and saw Smith grace the Top of The Pops stage for the only time in his 40 year career. Tom’s rendition tonight is as spirited as the original. Sackville has long been a personal favourite of mine and delivered acoustically adds to the poignancy of it. For many, the finest moment from the Inspirals debut album.

In a 30 song set, there were many highlights. His cover of Sit Down, a staple of the set since working with members of James several years ago delights the crowd. For me, the delicate Sleep Well Tonight and Leaving It All Behind from Hingley’s last solo album are the pick of an endearing set.