The Jesus And Mary Chain - Damage And Joy 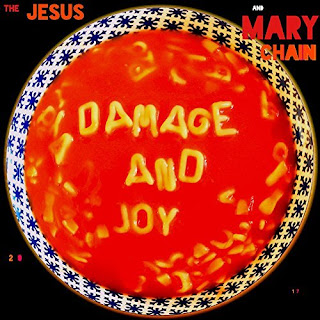 Incredibly, it has been almost twenty years since their last album. The long wait is over as The Jesus and Mary Chain return with their 7th album, cementing their reputation as leaders and pioneers of their field.

The Mary Chain have been back in the live fold as a band for a good few years now. Their concerts have taken them across the globe and are as incendiary as ever. Damage and Loss marks their return to the studio, demonstrating that despite their age (debut album Psychocandy is 32 years old), The Mary Chain are no nostalgia band. Instead, they roll back the years,delivering an album that is sure to please and inspire their fan base.

Damage and Joy is a curious new record. No fewer than seven of the songs included here have been issued before by both Reid brothers during their Mary Chain wilderness years, featuring on their solo projects Free Heat (Jim's band), William's Lazycame or recorded for their sister Linda’s band. However, the Reid brothers firmly believed that the songs should have been Mary Chain songs and their justification for inclusion here is valid. Produced by Killing Joke's Youth, he has captured the Mary Chain sound perfectly. Take opening track Amputation - previously only heard by a small group of Freeheat fans as an example - it's a bona fide Mary Chain classic. Amputation is instantly recognisable as The Mary Chain and could easily fit on a number of their previous albums. Complete with a bouncing bass (provided by sometime collaborator Phil King of Lush), William’s delicate, swirling feedback and Jim’s simple, yet repetitive vocals, the album is off to a great start.

Next up is War and Peace, a tune steeped in alternative rock heritage - War and Peace has a nod to Perfect Prescription-era Spacemen 3 with it’s expansive, laid back, blissed out sound. All Things Pass ups the tempo and has a great vocal from Jim, with William matching him with a furious guitar riff. You can almost sense that the infamous Reid brother rivalry has mellowed. Just when you're thinking they can't better it, along comes the joyous Always Sad, featuring one of several guest vocalists, Bernadette Denning. Possibly the best guest appearance features on the next track Song for a Secret which is one of two duets with Isobel Campbell. On Song For a Secret, The Mary Chain pay homage to themselves, as they manage to recreate the sound they captured on Sometimes Always, their beautiful duet between Jim and Hope Sandoval from 1994’s Stoned and Dethroned album.

There’s a real upbeat feel mixed throughout Damage and Joy, especially on the Moog infused The Two of Us, which again features Isobel Campbell of Belle & Sebastian. Los Feliz and Mood River show a softer side to the band and both tracks add a different dimension to the record. Presidici (Et Chapaquiditch) picks up the pace again with some great multi tracked guitars from William.

There are many tracks on Damage and Joy that are so distinctly Mary Chain that they sound like you've known them for years - Get On Home and Facing Up To The Facts are fine examples (Jim even quips “I hate my brother and he hates me, that's the way it's supposed to be” on the latter).

Damage and Joy is a triumphant return. It has all the hallmarks of The Mary Chain at their finest with nods to their influences like The Velvet Underground and Phil Spector. Youth has perfectly captured the sound which has enthralled generations of fans and musicians alike. Any doubters who poured scorn on the album when the track selection was announced will, I'm sure, be taking their words back as the Reid’s faith in the song choices are perfectly justified. Damage and Joy is a classic Mary Chain album. Welcome back.