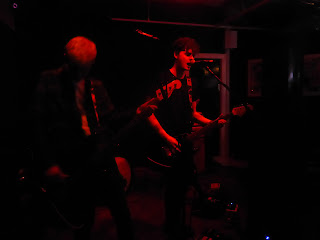 The second night of This Feeling's latest weekender at Jimmy's in Manchester saw Matter Of Mind blow away any lingering Sunday blues and doubts about their status as the best young band in Manchester with a fearsome performance that tested the tiny venue's sound capability to the very max.

It's testament to how far Matter Of Mind have come in such a short space of time that this already feels like they're just finishing off their apprenticeship before stepping up to the bigger jobs ahead of them. Watching some bands you can sense just how big they can become, how their sound is capable of projecting itself and appealing to the masses and the sense watching them tonight is akin to the likes of Catfish and Blossoms playing venues like this with the future mapped out ahead of them. A bold statement? Hype? Perhaps, but there's a growing band of people who know their stuff coming to a similar conclusion.

What makes them stand out is the way they fuse metal with indie (and no apologies here for the simplistic genrelisation) to create something that actually sounds different to what other bands are doing yet with the same tools at their disposal, like those aforementioned did. Different but not different in a sense. And as someone noted at the end, their growing confidence means that every show feels like a progression. Whether it be the sounds that Ash effortlessly looking teases out of his guitar, Conor's pounding drum beats that set the direction of the songs and backing vocals that add so much to them, Rob's understated yet vibrant bass or Jordan's journey to being an ever increasingly confident and attention-grabbing front man whose vocals deliver so much fire and passion, they've got all the prerequisites in spades. 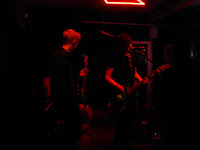 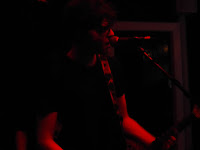 They've got the songs too. New single Far Too Wrong, which finishes the set, is a sign of ferocious intent that would be equally at home coming out of your mainstream radio speakers or Kerrang as it would sending thousands of indie kids into a frenzied mosh pit in a festival field. All three songs from last year's debut EP are present too, but Coffee Stains And Migraines, Silence and A State Of Mind (complete with first verse sung through a megaphone) have grown, expanded and feel like they'll batter you if you look at them the wrong way.  Their first song they put online The Blindside puts their development into even starker contrast packing a knockout swaggering punch and the two new songs they play - Sunken Revelations and Stay - feel like they're waiting just around the corner to finish you off.

There's plenty of bands around town with the bullshit and bluster about them, trying to hang on to any passing bandwagon or scene with a transparency to their game that makes us cringe. Like all the best bands from this city, past and present, Matter Of Mind are smashing all the tired bangers out of the way and taking us on their own ride.

Matter Of Mind are on Facebook and Twitter.  They play Manchester Dive NQ with Ist Ist and LIINES this Thursday (9th).