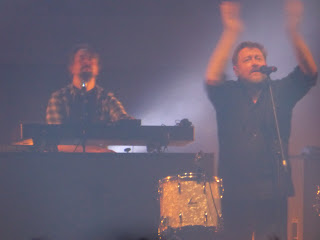 Elbow's tour to support the release of their recent number 1 album Little Fictions made its way to their home town of (Greater) Manchester for the first of four sold out nights at the Apollo where they delighted the crowd with a set that spanned their last four albums.

"Let's see your arms" shouts Guy Garvey for the seventh song in a row (we lost count) as Manchester balances on the precipice of an RSA epidemic on Monday morning. No one around us seems the remotest bit concerned about this and do as their master commands, as they do later when they hum a section of One Day Like This en masse or repeat random phrases such as "Don't mention the rugby" and "Don't sing what comes into your head, Guy" as he warms everyone up to join in on final song Grounds For Divorce. Such is the love directed towards to him, he could probably ask anything and most people in the room would oblige. It's a rare power, and whilst we think it's a little contrived and unnecessary and deflects from the music at times, it's undeniably impressive.

There's been mumblings that Elbow's work since The Seldom Seen Kid hasn't quite had the same connection, but to be fair that's almost asking the impossible, but there's moments tonight where everyone in the room sings to My Sad Captains, Lippy Kids and the lead track off Little Fictions, Magnificent (She Said) where that feels like utter nonsense. In fact, it's probably only Mirrorball and The Bones Of You, which both feel a little flat and The Birds, a song we've never warmed to, where they don't quite hit the mark. Even their only foray into their first three albums, a beautiful aching Scattered Black And Whites, is met with a outpouring of love and respect from the crowd. 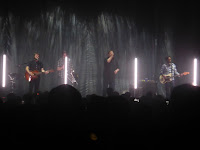 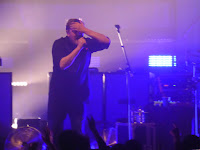 The songs from Little Fictions work exceptionally well live, far more so than we feel they do on record. First of all, Mark Potter's guitar gets turned up and comes to the fore on All Disco, the title track, Kindling and the aforementioned Magnificent (She Says) whilst opening track Gentle Storm is played out in front of a curtain that reveals their new live drummer Alex as well as Rosie and Gita on strings and backing vocals. The title track harks back to their earlier work, dark, shuffling, a little claustrophobic and unsettling whilst All Disco feels glorious in its execution, letting loose the shackles a little.

Previous album The Take Off And Landing Of Everything is represented by Fly Boy Blue / Lunette, New York Morning and My Sad Captains, and like most choices from the back catalogue, they make the right ones. The former is two songs in one, New York Morning is drenched in romantic observations of a city going about its business and the latter is a beautiful eulogy to friends departed that the audience take over on Guy's command.  Lippy Kids, which opens the two song encore, is dedicated to "you lot, we're so fucking proud of you Manchester" and is glorious in its execution, the crowd lustily singing back the "build a rocket boy" lines.

The biggest reception is of course held back for One Day Like This and Grounds For Divorce, and once the contrived start of the latter is out of the way (four thousand people singing the names of the Potter kids is one of the coolest or least cool things ever dependent on your viewpoint) the power which they both possess is breathtaking. There doesn't appear to be a single person in the room to whom these songs are not part of their DNA, at the core of which is a sense of civic pride that seems to run through the whole evening. 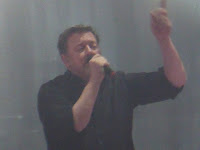 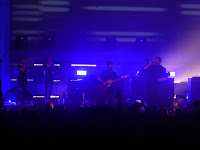 We can even forgive some of Garvey's idiosyncrasies; a plea to make Manchester the first city to have no homeless people without a means of how other than him not sounding like Bono, getting us to chant the names of one of the Potter kids who won a guitar competition earlier in the day and Reeves, the surname of Alex the drummer and him telling someone who wants more early material that he'd be the only one there if they played them all (not true). We do so because, despite the arm waving fetish, he's one of us and therefore the songs he and his mates write are for us too.

Elbow played Gentle Storm, The Bones Of You, Fly Boy Blue / Lunette, All Disco, Mirrorball, New York Morning, Scattered Black And Whites, Little Fictions, Kindling, My Sad Captains, The Birds, Magnificent (She Said), One Day Like This, Lippy Kids and Grounds For Divorce.