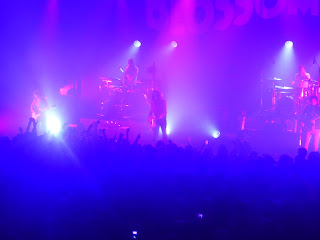 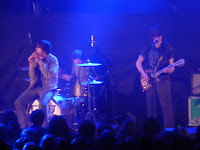 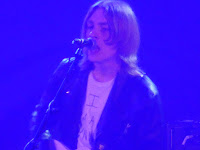 The second night of the year's biggest triple-header bill - Blossoms, Cabbage and Rory Wynne - rolled into the spectacular surroundings of Liverpool's Olympia Theatre on Friday night. Three acts at different stages in their trajectory brought a mix of styles and approach to the night, but each one confirming that they're set for bigger things in 2017 and beyond.

The NME tour opening slot has historically been a breeding ground for big acts just about to storm the hearts of the nation (see Arctic Monkeys, Franz Ferdinand) and whilst the magazine seems to be on its last legs, this is one tradition that, this year at least, shows no signs of needing its death warrant signing. Rory Wynne possesses everything that you expect your rock star heroes to. His stage presence is self-assured, confident and arrogant, he knows how good he and his band are in the same way the Roses and Oasis did in their early days and we haven't had someone with that swagger and the tunes to back it up since. 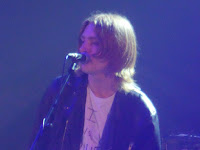 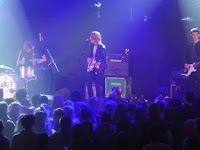 His set features all four tracks from his recent stealth release EP What Would Rory Wynne Do? and live the songs have a more imposing tone and impact, as if they were written in his bedroom with big halls like this in mind. You can sense (and see from our position on the balcony) the kids down the front starting to move, to be won over by this by the end of the set, which of course is the reason he's on this tour with his excellent band. Star In The Sky has gathered radio play, but such is the strength of that EP, all these songs feel like singles as do his opening Post-Party Confusion, set-closing Why Don't You and a new one. He knows it, we know it and by the end of this tour, a lot more people will know it too.

The Cabbage bandwagon continues to roll at an unstoppable pace, unhindered by Lee's recent accident at a railway station where he broke his pelvis and thus has to spend most of the gig seated despite him ignoring doctor's orders at times and hobbling around, joking at one point he looks like Noel Gallagher when a tech brings him his guitar. Surprisingly his inability to rip his top off and dive head first into the front rows doesn't dilute Cabbage as much as we'd expected, but that's because they've moved on from the shock factor of their early shows into quite a formidable rock punk outfit with a set of songs that do their bidding for them. Uber Capitalist Death Trade kicks things off and a mosh pit ensues immediately, save for the girls to the side who Lee chides with "don't worry, girls, Blossoms will be on soon." 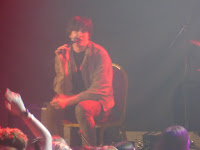 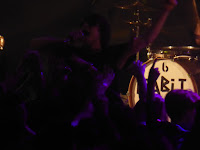 Their set feels like a non-stop assault - Fickle, Indispensible Pencil, Terrorist Synthesizer, Dinner Lady, Necroflat In The Palace ("under 16s, cover your ears, this one is about necrophilia) and the epiphany of Kevin and a wild chaotic unstructured jam that follows it. Lee and Jo share vocals, but as Lee quite rightly acknowledges as he tells us to "listen to the band" whilst pointing at Stephen, Eoghan and Asa, Cabbage are much more about the sum of their parts, a riotous noise that you'll either love or loathe. One look at the crowd and the result tonight is crystal clear, the bandwagon doesn't seem to be stopping any time soon.

Blossoms are reaching that stage where bands get to the size where they change and lose that magic that made them special in the first place to those who witnessed them in the smallest venues. Yet they show no signs of doing that just now. Rather than stretch a ten song set out by simply adding in an extended intro, a contrived singalong bit or some such nonsense, they simply play more songs and that's why they're different from the rest of the pack. The likes of Smoke, Across The Moor, Fourteen and Polka Dot Bones are songs that other bands with the same heady ambitions as Blossoms would kill for as their signature track, yet they didn't even make the first cut of the debut.

This allows them to focus on what they do best - delivering a set that's full of songs that you can sing every word to, songs that talk of subjects that young and older can relate to and which musically feel timeless. There's a beauty to the likes of Blown Rose, Getaway and Honey Sweet that is generation spanning, both on record and in the live environment, equally appropriate to sit back and breathe in its quality or to open up a circle in the centre stalls and then pile in and lose yourself that way. They're also not afraid to play with the songs either, a dash of Abba thrown in at the end of Texia, combining four sets of vocals at the end of Smashed Pianos and an imposing new intro to Cut Me And I'll Bleed. They've also got a lighting set up that works perfectly with the songs and the sound is crystal clear perfect.

Even twelve months ago, Tom was still developing as a front man, now he's the finished article. Still slightly in awe of what's happening to them, yet cognisant of the power the five of them hold when they step on to the stage. He conducts the first verse of Getaway which he has no need to sing, introduces his band mates at regular intervals and dedicates My Favourite Room to a girl called Ellie in the audience who'd recently been dumped. 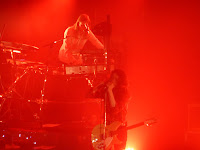 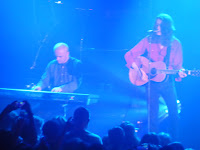 When he gets to the solo section, he invites a guest on stage. Whilst parents should generally been seen and not heard and getting too involved with their kids' band often ends in cringeworthy embarrassment all round, Josh's dad Robin is a rare exception and his involvement makes for a special moment. A classical musician in his own right, he plays keyboards to accompany Tom on acoustic for a beautifully intimate Stormy that doesn't lose anything even in this big hall and the ecstatic My Favourite Room which Tom twists first into Imagine and then into Half The World Away.

Charlemagne finishes things off with the expected bedlam as the whole stalls area is reduced to one heaving sweating mass. We think of what's gone before and smile because it's nowhere near one of their best songs, but you can't deny the impact its had and how it was the turning point in the band's fortunes.

Like Rory and Cabbage that preceded them, it feels like Blossoms are still on the upward part of the curve, still progressing, still winning over the hearts, minds and playlists of the people. Whilst we'd like to hear some pointer to what's coming next, tonight, this tour and the summer is about celebrating the debut record and the songs from the EPs that accompanied and augmented it, and Blossoms are still painting new patterns and shapes on its canvas in the way truly special bands do.

Rory Wynne played Post-Party Confusion, Supernova, Star In The Sky, In The Dark, After Me, Tell Me and Why Don't You