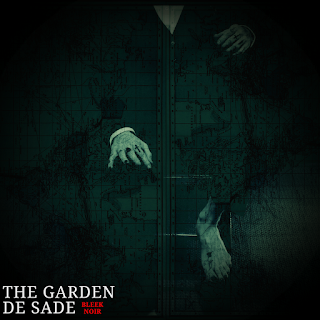 The Garden Of Sade is the second EP from Bleek Noir, a journey through the dark, twisted creative mind of one man, six songs that could you imagine soundtracking an improvised theatre piece.

Opening track Do You Know What I Mean starts off recalling the drama of Duke Special, and that’s a comparison that remains valid musically throughout, and it’s when Bleek starts to recant the story that things take a sinister darker turn. Talk of “you make me still inside, through gritted teeth” and “touch me like I’m full of war” might not make sense written down, but in the context of music that darts from one place to the next and a voice that zigzags between styles unpredictably, like you’re being led blindfolded down a dark alley, it somehow makes perfect sense.

Lips Left Hissing introduces itself with the line “fuck me dead, it all fell out my head” and hurtles headlong, pregnant with dramatic tension, through three minutes of words that feel both meticulously constructed yet at the same time like an expulsion of whatever comes to mind in Bleek’s head.

The theme of death runs through the songs here. Can’t Have Her eerily screams about a cadaver, cold hands and naked wrists with enough detail to put the listener on edge but not enough to know the full story with lines like “do I keep these eyes?”, creating an uneasy listen.

Ten Kinds Of Love leaves you feeling battered and bruised, a metallic sound running through it, throwing sharp aural punches for two and a half minutes whilst Bleek declares that love “is a dirty word and I’ve seen the worst of it.”

From The Bell Jar moves away from themes of love and deals with social collapse of England in these post-Brexit times with lines such as “wipe my head with a bloody rag, behold and make this our new national flag” and “don’t understand this die where you’re born” in a way few artists seem to have dared to address the biggest issue of our times.

The final track Last Night I Saw Myself With The Animals isn’t as frantic or chaotic as what’s gone before, but that simply adds to the dramatic menace of the piece as you’re expecting an explosion that never comes as Bleek tells of hounds ripping out his spleen with almost relish.

The Garden Of Sade is quite some journey, not one for the squeamish or faint of heart, but it’s always intriguing and will have you on edge anticipating the next off-piste move with trepidation. It avoids the pitfalls of descending into overblown theatre that this type of music can often fall into. And by the end you’re even more confused about what goes on in the mind of its mysterious creator than when you set off.

The EP can be purchased from iTunes.