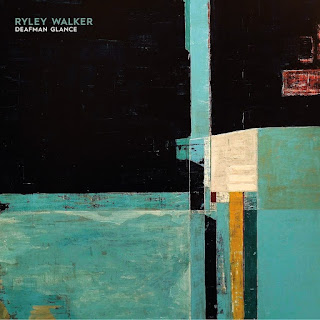 Telluride Speed is the lead track from Ryley Walker's upcoming fourth album Deafman Glance, due for release on May 18th. Featuring his distinctive voice and loose jamming style, it's unmistakably Ryley, but feels like a progression from his 2016 album Golden Sings That Have Been Sung.

Ryley has said about the recording of the album, produced with LeRoy Bach as was its predecessor Golden Sings That Have Been Sung - "I was under a lot of stress because I was trying to make an anti-folk record and I was having trouble doing it. I wanted to make something deep-fried and more me-sounding. I didn’t want to be jammy acoustic guy anymore. I just wanted to make something weird and far-out that came from the heart finally. I was always trying to make something like this I guess, trying to catch up with my imagination. And I think I succeeded in that way — it’s got some weird instrumentation on there, and some surreal far-out words. The last record was cool but I was still figuring out what I was good at. But I’m fucking 28 years old, I’ve got to figure out a sound, figure out something that I enjoy doing. So this record is a little bit more grown up. Ol’Ryley’s just workin’ on bein’ a better Ryley. I think more than anything the thing to take away from this record is that I appreciate what improv and jamming and that outlook on music has done for me, but I wanted rigid structure for these songs. I don’t want to expand upon them live. There’s a looseness to some of the songs I guess, but I didn’t want to rely on just hanging out on one note. It’s so straight-forward that I can see a lot of people really not liking it to be honest. But I’m so happy, I’m happy that it’s completely different and unexpected."

The album features nine tracks - In Castle Dome, 22 Days, Accommodations, Can't Ask Why, Opposite Middle, Telluride Speed, Expired, Rocks On Rainbow and Spoil With The Rest - some of which were previewed at Ryley's shows last summer.