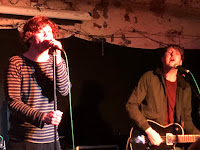 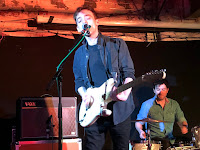 Neon Waltz's Strange Hymns albums was one of the highlights of 2017 and on the back of it, they're currently near the end of a UK tour in support of it and the Bring Me To Light EP that came from the same sessions. We caught their show at Manchester's Soup Kitchen where they battled with sound issues but ultimately emerged triumphant.

Rosborough have been opening up on this tour and the two-piece from Derry are a different kind of guitar and drums outfit. Rather than the current trend for that combination to deal in as much noise as possible, Rosborough take a more mellow but not less powerful or direct approach. Made Of Gold, Tell Me, In The Moment and Another Lesson feel like songs created by a singer-songwriter, but given an adrenaline boost that works its magic and transforms them into something else. It's an impressive passionate performance that really captures the emotional content of the songs and the imagination of the audience who respond well. 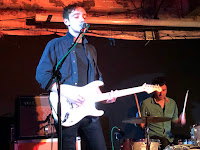 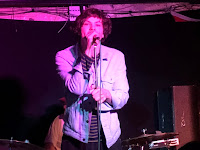 Neon Waltz's forty minute set feels like something of a greatest hits set already even though they're only one album in. That's testament to the quality of their debut album Strange Hymns that the set contains some of the most immediate yet intense singles that have been released in the past couple of years - Barewood Aisles, Dreamers, Sundial, Heavy Heartless, Perfect Frame and the set-closing Bring Me To Light. Despite some really problematic sound issues, these songs still manage to shine through the fog and the cold in the dark basement. You sense how Jordan is starting to relish the role of front man, coming out of his shell a little, without ever feeling like what he's saying or doing is forced or cliched. 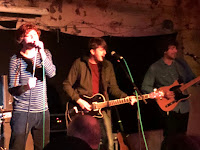 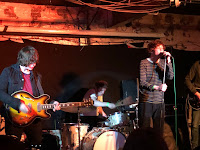 When they slow things down, like on I Fall Asleep and the magnificent Schoolhouse, they show that they've got the mastery of the slower paced songs and maintain the ability to hold the audience's attention. The weather might have meant that Soup Kitchen wasn't sold out, but the healthy-sized crowd were exceptionally appreciative, singing or nodding along, restrained mind, and letting the bold melodies, harmonies and the soaring choruses wrap around them. The set isn't long enough for a band of this calibre, but that will surely come when they start to reveal more tracks from their second album. For now, Neon Waltz are a pleasure best served in these measures; one of the most underrated bands around, but one of those that once you've experienced them, you'll be smitten for life.