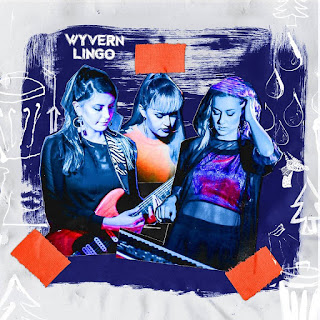 Wyvern Lingo released their self-titled debut album a couple of weeks back which reached number three in the Irish charts. The Irish trio are over in the UK for a tour starting this week. We caught up with Karen, Saoirse and Caoimhe before they set off to find out more about them, their album and the upcoming dates.

Hi, could you introduce Wyvern Lingo and how you got together please?

We're a trio from Ireland. We met when we were eleven and became friends over similar tastes in music. We started playing music together and writing songs soon after that, but went full time as a band three years ago. We've just released our debut album and are feeling really good.

It’s an interesting and unusual name. Where did it come from?

We we’re in secondary school together and our music teacher at the time told us we needed a name for the Christmas concert. We flicked through the dictionary and landed on the word Wyvern and thought it was to epic to skip over. We then entered the word Wyvern into a band name making website and well it was either Wrath of the Wyvern or Wyvern Lingo.

The tracks on the album suggest a really diverse mix of influences. Who inspired and still inspires you to make music?

We say that the album is pop influenced by rock and RnB. When we were kids we listened to a lot of our parents music. We swapped albums like Queen, Led Zeppelin, Joni Mitchell and Fleetwood Mac. The 60’s and 70’s was our bread and butter.  We’re all 90s babies too so pop music and RnB has naturally influenced our music too. Big inspirations for the album would be NAO, A Tribe Called Quest, Tom Mish and Solange.

It’s been four years since your debut EP The Widow Knows. How have your songs developed in that period?

Well we released another EP after The Widow Know’s which was called the ‘Letter to Willow’ EP. We recorded that EP in Germany and Dublin and we think it’s a strong link to the album. The Widow Know’s was an EP that we made with the tools we had at the time. Caoimhe had just got back playing drums and Karen was using a synth bass for the first time. When we got around to recording the ‘Letter to Willow’ EP our sound had grown again. Myself and Caoimhe got iPads and started demoing a lot on GarageBand. On one of the tracks ‘Running’ we used the vocals from my demo, manipulated them and they are on the finished track. When we got around to recording the album we had mastered our sound and learned a lot from just demoing standing back from it and then being able to hear changes that were needed. I know it’s a cliche but practice makes perfect and practice takes time.

How has the response been to the album?

So far it’s been incredible. We are touring at the moment around Ireland and then we hit the UK, Germany and Amsterdam. We have been able to meet a lot of our fans at the last few gigs and chat about the album. It’s such a good feeling knowing that something you have worked on for so long is truly appreciated. The radio stations are showing us big love this year supporting every single we put out, and one of our songs from the album ‘I Love You, Sadie’ has been nominated for the choice music prize song of the year!

Could you tell us about the message behind the album’s opening track Out Of My Hands?

Out Of My Hands is about a man I met in a pub who was being negative and largely apathetic towards activism. I tried to level with him, but didn't get very far. I came away really frustrated because his sentiments echoed that of so many I've come across - commentators on the refugee crisis, housing crisis and the Repeal movement who would rather critique then actually engage. Then I started wondering how he saw me and the conversation we'd had, so I wrote this song through his eyes.

Do you write as a band or do people bring ideas in?

A bit of both, but most of the songs on the album came from a lyric / melody idea that one person had and then brought to the group.We then build it up and arrange it together. We often go through many versions of the same songs. Having said that, the songs that bookend the album- Out of My Hands and When I Can (Rubbish) were largely collaborative, with most of Out of My Hands being written in studio.

You’re about to embark on a UK and European tour. Is there anywhere you’re particularly looking forward to playing?

Ah, I don't know if we could pick. We love the new and shiny places (Berlin, Cologne) but at the same time we got tastes of places like Manchester, Bristol and Edinburgh playing support to Hozier and James Vincent Mc Morrow, and were always looking forward to returning for our own shows. Really looking forward to playing Leeds again- our show at Live at Leeds last year was so much fun.

One of the dates is at the Castle Hotel in Manchester. Have you played here before and any particular memories of doing so?

We've played Manchester three times now, but never the Castle Hotel. We've been hearing great things about it though so are really excited. We played Manchester on the last gig of Hozier's tour, and we pranked him and his band by sticking our flyers all over their dressing and hiding the booze (we did leave cryptic clues) It was great fun. We also had a good time in a bowling alley and bar  That's a great idea.

Many of our readers might not have heard you before. How would you describe your sound to someone unaware of Wyvern Lingo?

It's Alternative Pop influenced by Rock and RnB. Our music is chunky and sincere.