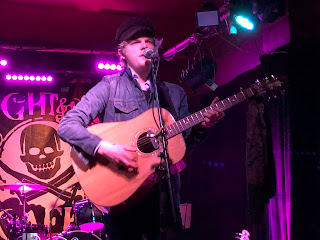 Jack Oliver Monty might be best known for his role playing in both Maddy Storm's band and in Ethan And The Reformation. However, what people might not know is that he writes and performs his own material. We caught up with him at a rare solo outing at Manchester's Night And Day Cafe on Saturday night for a seven-song set.

You wonder how many musicians have hidden their light under a bushel in being part of a band and not pursuing their own path and hopefully that won't happen with Jack. His seven-song set shows him to be a fine songwriter in his own right, able to craft songs with a depth of emotional intelligence and feeling that connect. The opening slot at the Night And Day on a Saturday night when some of the clientele have been out on a St Patrick's Day bender isn't really the ideal place for thought-provoking solo songs with just an acoustic guitar, but as Jack finishes his set, a very much worse-for-wear German approaches and simply tells him he's wonderful. It's echoed by the response to the songs, which grows louder, even from those at the bar and beyond, at the end of each one of them.

Jack's ability to put himself down, declaring songs to be new ones "because I'm a nobody and no one knows me" and another one called "the snot song", belies the fact that he's written songs that will resonate with people should they get the opportunity to hear them. Please Don't Run is a love song, a plea to get someone to stay (although he jokes that it's about health and safety) is so expressive that you feel you're living the song whilst Naff All (or Fairytales From A Northern Town) is a beautifully wistful and dreamy track that needs to be heard by a wider audience, whilst the beauty of Start The World Again is in its simplicity, which allows the emotion in the words and his voice to be accentuated.

He finishes with a cover of John Martyn's take on Lonnie Johnson's blues classic Jelly Roll Baker, a brilliantly light-hearted contradiction to what's gone before. The response to the set, from those who'd come specifically to watch him and those that just happened to be there, will hopefully advise him that he shouldn't allow other projects to be at the expense of his own. Either acoustic like this or fleshed out with a band there's something special in these songs.

Our interview with him can be found here.