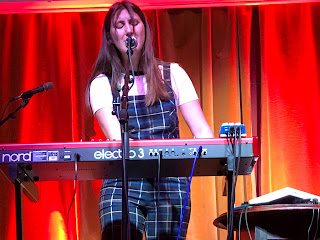 Sailing Stones is the new project of Jenny Lindfors and she’s on tour to support the release of debut EP She’s A Rose. She called in for an intimate seated gig in the ballroom at Gullivers in Manchester to preview the EP as well as roadtest new songs that will get recorded in April.

It’s a very rock and roll thing for bands to come on late, but not what you usually expect at a show of this nature, but no one, other than those who need to depart for transport, seem to mind the delay once Jenny makes it onto stage. Immediately we’re struck by how engaging she is, giving us a fascinating insight into the songs she’s playing, both in terms of the subject matter and the recording process. It allows us to immerse ourselves in them, and the silence the songs are granted is admirable.

She starts with a new song Emanuelle and it’s immediately clear that Jenny’s thought long and hard about how these songs translate from the loaded versions that get recorded to these one woman shows. Judicious use of a tempermental synth, looping pedals, acoustic guitar and keyboards combined with her rich evocative voice results in a haunting combination that punctuates the reverent atmosphere.

The loops are put to good effect on previous single Telescopes, whilst Sit In Silence from the EP has a more simple acoustic approach that simply charms us despite Jenny hoping “it’s not depressing the living shit out of you.” If anything this humble unassuming approach just warms us to her more, particularly when she tells us about “not tabloid worthy” stories of living next to Chris De Burgh when introducing a beautiful new piece, a gorgeous dripping love song called The Fire Escape. We’re slightly shocked at her tale of playing this fragile music at a surf cafe in her adopted South West home and being handed a shot that someone shouted was rohypnol, but it shows that there’s a darker side than the music reveals.

The Blazing Sun and Into Space are both shorn of the brass, strings and backing vocals of the recorded versions, but the stripping away of layers reveals the inner core of both songs and focuses us on the innate inner strength of her songwriting. She finishes with a Neil Young cover and she regales us with tales of finding cassettes of his Ditch Trilogy albums in second hand bookstores before delivering a stunning version of Love In Mind from Time Fades Away. It’s an unusual choice for a Neil Young cover, but sums up Jenny’s approach to her art.

Jenny promises that she’ll be back soon, gracefully thanking promoter Shay for enabling her to play in town, and it’ll be intriguing to see what format she comes back with as these songs and her creative mind leave open so many intriguing possibilities.