TRACK OF THE DAY : Trampolene - Hard Times For Dreamers 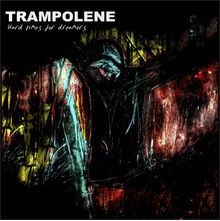 It might only be six months since Trampolene released their debut album Swansea To Hornsey, but one of the hardest working bands in the country are back with their new single Hard Times For Dreamers ahead of an extensive UK tour.

Hard Time For Dreamers will delight the Trampolene faithful, but should also appeal
To newcomers, its calling card declaration “it’s not a revolution, it’s a revelation” with a sense if rebellious anger being repeated as the song comes to its conclusion. Crunching guitars, call and response vocals and drums that dictate the build to that punchline make their presence felt.