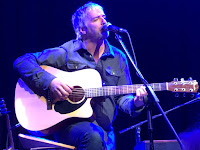 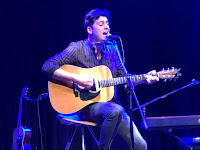 John Bramwell brought his Leave Alone The Empty Spaces album tour to the intimacy of St Helens Citadel on Friday night. A set that mixed classics from his I Am Kloot back catalogue with songs from both his new album and the second one he's in the process of recording delighted an attentive and appreciative crowd. Support came from Dave Fidler, who also took the opportunity to debut some new songs.

After being introduced by John as being invited on tour because he's "bloody good", Dave Fidler takes to the stage. He wasn't here the last time John played here so it's his St Helens debut, so he starts with three tracks from his solo debut I'm Not Here, opening up with the title track and his ode to his son, Easy Gone Easy Come. The crowd are immediately drawn in to his heartfelt lyrics and the emotion in his voice as well as his intricate guitar playing. It's that which lights up Tommy, his instrumental tribute to one of his heroes Tommy Emanuel which follows those two songs. 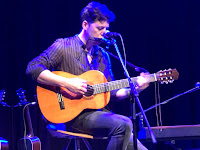 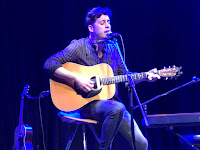 He concludes his set with three new tracks from his second album that he's in the process of recording at present. They each have the same traits as those from his debut, but they also show a progression in the songwriting, buoyed no doubt by the response that he had to his debut. Broken Melodies, the first of the three in particular, has a richness of emotional understanding running right through it, rather than the simple platitudes that often pass for singer-songwriters, whilst Can't Stand It has a harder edge to it and he saves the best of the three, A Melody, to last. He goes down a storm with the St Helens crowd, not surprising given there's a lineage route between him and the headline act.

Introducing John, Dave says that no two John Bramwell gigs are ever the same. And that's quite an understatement. At one point he makes a joke about the setlist and Dave and Al (who plays keys and accordian) having to guess which song he's going to play next when he's working it out himself, but that's part of the charm of these shows. There's something magical about no one in the room quite knowing where the set is going to go, the spontaneity of both the artist and the audience's reaction to events, whether it be a twist on an old favourite song, the interaction between John, Dave and Al or the good-natured heckling and cat-calls from the crowd that John always had a response to.

The crowd are also attentive though once John starts to play; equally so for the songs from his new solo album Leave Alone The Empty Spaces and two as yet unreleased tracks from its follow up - Days Go By and Leave No Traces - as they are for the best-known songs from his extensive I Am Kloot back catalogue. It's no surprise though as those new songs stand up against anything he's recorded before. 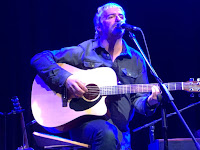 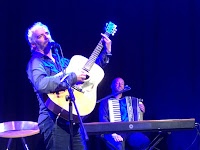 There's a melancholic feel to the likes of From The Shore and Meet Me At The Station, a world-weary edginess that runs through the best of his work from the days of Johnny Dangerously to now, whilst there's a simple elegant beauty to Sat Beneath The Lightning Tree and Leave Alone The Empty Spaces that allows the richness and the depth to his voice to shine through and those who favour the more commercial later-day Kloot are sated by the album's lead single Who Is Anybody Anyway and Time's Arrow. What's also great to notice is that the audience clearly know the new songs; something that nowadays rarely happens with band front men and women who go solo.

There's also a sense with the I Am Kloot songs that stripped down is the way to hear them as they were meant to be, as in the moment of their creation. The likes of Mouth On Me and Bullets have a raw, primal energy that's drawn into sharper focus in these stark naked conditions, whilst Al's keyboards add a haunting quality to the likes of The Same Deep Water As Me and Over My Shoulder. There are of course moments where John encourages audience participation; noticeably on To The Brink where we're complimented for being "out of tune and out of time, therefore artistically correct' and on the final two songs Northern Skies and Proof, where they let go and sing along rather than mouthing the words respectfully. 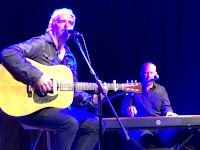 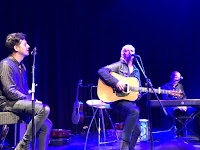 As the evening progresses, you feel them relaxing, John laughing at an incident last time he was here when he had to have two people removed for throwing drinks at people, reminiscing about going to see Ken Dodd and his Diddymen and them not being that short, whilst laughing at the fact the stool Dave has brought from him is too high for him to reach the floor whilst as they discuss tuning guitars, someone shouts that Dave is John's carer, much to his amusement. As they start up Northern Skies, John tells us "you can help with this one, because God knows we need it." It's this ability to laugh, forge a bond with the audience coupled with a fine line in cutting responses when required that makes this much more than a simple concert.

For most other artists, this might be considered messy, but it's absolutely why these shows, even without considering the magnificent music, are so wonderful. In a world where music is becoming more and more formulaic, rehearsed and scripted down to a tee, John Bramwell is an ocean of chaos from which rises the most beautiful, heartfelt and genuine songs you're likely to hear.

John Bramwell played Bigger Wheels, Mouth On Me, Meet Me At The Station, 86 TVs, Over My Shoulder, Morning Rain, To The Brink, Gods And Monsters, Sat Beneath The Lightning Tree, Leave Alone The Empty Spaces, Who Is Anybody Anyway, From The Shore, From Your Favourite Sky, No Fear Of Falling, I Still Do, Time's Arrow, Bullets, The Same Deep Water As Me, Days Go By, Leave No Traces, Northern Skies and Proof.

The album, alongside a companion Live in 2016 CD recorded at his shows in Manchester and London can be purchased from his official store.