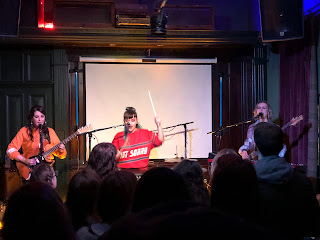 With a number three album back home in their native Ireland in their back pocket, Wyvern Lingo are in the middle of their debut UK headline tour, packing out The Castle Hotel in Manchester on a cold Sunday night. An hour and a half set compromising of most of that self-titled debut as well as tracks from their The Widow Knows and Letter To Willow EPs and three covers as well showed a huge diversity to their sound as they shared lead vocal responsibilities.

It'd be hard to put Wyvern Lingo in one of those boxes that people constantly seek to put musicians in. One minute they're coming across all funk rock, the next they're channelling perfectly acapella pop three-part harmonies almost seamlessly, whilst they also show us a very strange 1990s cartoon as means of introduction to a song as well as covering Fleetwood Mac, Drake and Mott The Hoople. It's a diversity of sound and approach that serves them well for what is an impressive time on stage for a band with just one album to their name.

Lead vocals are shared primarily between Karen who also plays keyboards and Caoimhe on drums, percussion and guitar on a few songs, with Saoirse providing harmonies and guitars to the mix and later in the set some lead vocals. Like the contrast in the sound; the intensity varies equally wildly, from moments of loose abandon to others where their focus is steely. They've come here and mean business; the first sign being the huge amount of kit they've brought with them, which they somehow squeeze on to the Castle's tiny stage. Whilst they might be used to bigger stages back home, you wouldn't sense that they mind; insistent on getting an initially reticent Sunday night crowd into what they're doing.

If anything the covers aren't really necessarily as they've got plenty of material of their own across the album and the EPs that shows off pretty much every aspect of what they do. Snow 2 and Used are beautifully constructed, every detail meticulously performed, every vocal harmony hitting the right spot, whilst the likes of Subside, When I Can and I Love You Sadie encourage the crowd to get moving the way they are on stage, particularly the infectious energy of Caiomhe whether sat behind drums at the back or centre front.

They like to tell the stories behind songs too, as a way of letting the audience in and helping us warm to them, although the energy in their performance means that isn't really something that's required. The cartoon we're shown is the Woodcutter's Wealthy Sister on which one of their songs Beast At The Door was based. It's not something we've witnessed at a gig before, but it works.

By the end the hour and a half has flown by, an impressive size of set for a band that's still in their relative infancy, and they've held our attention throughout. They've already clearly outgrown venues of this size, retain an ambitious approach to their sound, unafraid to challenge the audience by moving effortlessly from one genre to another at a different end of the scale and do it all retaining a very open and human relationship with their audience. They intend a Wyvern Lingo gig to be fun, first and foremost, for them as well and us, and in that they succeed wholeheartedly.