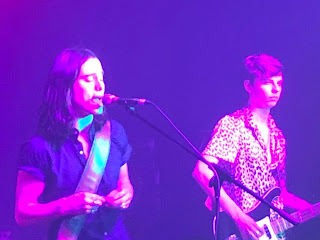 Carnival Club's biggest Manchester show to date saw them headline The Bread Shed and run through tracks from their two EPs to date - Magdalena's Cape and the recently released Nomads And Crooks. As the night finished with what seemed like half the crowd on the shoulders of their mates during the encore of House Of Cards, they left with the celebratory cheers of the audience ringing in their ears.

What makes Carnival Club stand out from their contemporaries is their heavier approach to what they do. The huge riffs upon which they hang most of their songs are the sort you'd expect from stadium straddling bands, take the aforementioned House Of Cards that swaggers like the bastard son of Ace Of Spades or the way their opening track You're So Hostile announces their arrival with a bang.

There's a real feeling of communion between audience and the band tonight; as if everyone here knows each other and the energy feeds from the stage to the floor and then ripples back accentuated. The venue, a new one to us other than a Dot To Dot show six years ago, plays its part too; it doesn't feel like any other in town and its width allows everyone to feel close to the band and the action. And as everyone raises their arms in unison as House Of Cards enters the break down, it's a really powerful statement from the band.

The set covers all ten songs from their two EPs - House Of Cards and Nomads And Crooks - both full of the sort of strident confident guitar-led anthems that we've come to expect from Carnival Club. Mistakes, Troubles and Kisses from the former and the dirty rough and ready Sin City from the latter are two of the highlights, but it's probably the unreleased Cecilia that steals the show. It takes the foot off the gas a little, turns the volume dial down a notch, but rather than strip them of their power, it allows them to blossom out, guitarist Eddie to let loose and for them to show that they've got the ability to seduce as well as to blow people away with raw energy. The other unreleased song of the twelve they play, Marble Eyes, similarly bodes well for the future.

But those are for another day, tonight is about the here and now and as the sweat-drenched band and audience create heat enough to combat the freezing night outside. There's a connection between Carnival Club and their crowd that not every band can achieve, but one that's critical to success. Already at the point they can play for an hour without diluting the quality of the set, they're ready to make the next step up.

Their tour concludes at Leeds The Lending Room (March 20) and Hull Fruit (21).