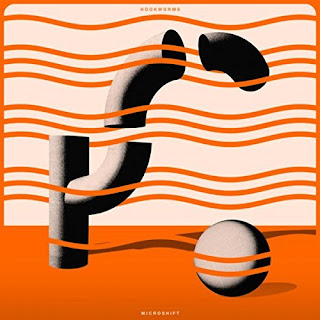 Much lauded Leeds five-piece return after a lengthy absence and deliver their third, and strongest LP to date. Stuart Ralston has a listen.

Many of our friends at Even The Stars are big fans of Hookworms, the Leeds band who have just delivered Microshift, their excellent third album. There has been an almost four year gap between albums for Hookworms. Singer and producer MJ’s studio was badly damaged by a flood two years ago. Despite the setbacks, the band have returned stronger than ever.

Opening with the retro Roland drum infused sound of Negative Space, it sees Hookworms in a more club orientated space than they have been previously. The Moog heavy Static Resistance almost feels like early Stereolab and features a driving rhythm section before the band slow it down and neatly sequence into Ullswater.

The Soft Season is a much more sedate affair and is a reflective love song, if you can believe that from the usually uncompromisingly sonic pioneers. It has hints of Lazer Guided Melodies era Spiritualized too, with some beautiful woodwind accompaniment.

The grandest piece here is the epic Opener, which sees the band team up with sometime Spectrum / Jazz Butcher collaborator Richard Formby, who adds his own brand of psychedelic synths. Formby is not the only guest, as Alice Richards, from Virginia Wing duets with MJ on Each Time We Pass, as well as contributing backing vocals on several other songs too.

Boxing Day is a real highpoint of the album and is almost something of a Joy Division / New Order hybrid. The band augment their sound again on Reunion - the beautiful saxophone features on this short instrumental track and it could easily be expanded out further. Perhaps it gives us an indication of where Hookworms are heading next.  We hope this is an avenue they will explore again.  Shortcomings, the album closer is dominated by MB’s bass and is perhaps the poppiest moment on the record and for me the standout track.

Microshift is a really diverse album. There's moments of pop, rock, dance and psych. For me, it is Hookworms best record to date. Perhaps more accessible than earlier outings, it is sure to see their fan base grow even further. The band all hold down day jobs yet find time to deliver records as exhilarating as this.