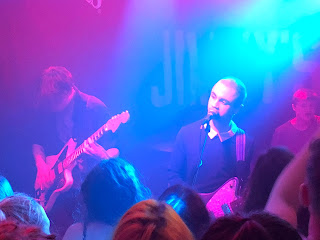 York's Faux Pas have spent much of the last eighteen months touring round the UK incessantly, but it's been a while since they played Manchester, so we didn't pass up the opportunity to catch a band that are taking the organic route to success by getting out on the road and doing the hard miles and using their most potent weapon - their music - to best effect.

There’s a more than healthy crowd gathered in Jimmy’s. Considering the weather, it’s a miracle they’re here at all, but for half an hour they set about warming us up with a set of songs and a performance that belied the fact this is a hundred capacity venue.

A tireless gigging schedule means Faux Pas have become a powerful, exceptionally tight live outfit in the year since we last saw them at Dive. Reuben, wearing a dress and striking make up, channels an aggression in his performance that reminds us of when Placebo were playing this size of venue a couple of decades ago. Most of the touchpoints are there, but Faux Pas are no copyists or wannabes, they’ve got their own personality as a band and they make sure we’re on first names by the end of the night when Reuben departs through the middle of us to leave Morgan, Lewis and Joey to dispense with the end of their standout set closer Golden.

The rest of the set doesn't baulk in comparison though. A song we think is called TV-AM Made Me Paranoid, which they tell us is going to be single, is as belligerent and swaggering as the band's performance of it and I Hate Dancing and You Can Own Me sends the first few rows into almost meltdown. It's an interesting fan base they've got, from girls down the front who know every word, to the cool boys stood at the back in their carefully chosen outfits, to canoodling couples and some old timers like us. But they're joined in raucous appreciation of a band that's building its reputation on consistent touring and going eyeball to eyeball with the people who listen to and buy their records.