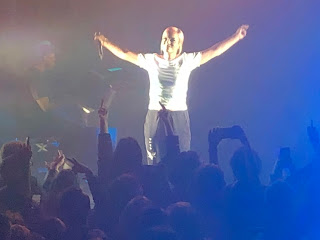 Lily Allen played her first show in over three years in the intimate setting of Manchester's Gorilla club, revealing twelve songs from her forthcoming album No Shame and five old favourites in front of an ecstatic supportive crowd.

"I'm really nervous" confesses Lily a couple of songs in, so much so that's she almost giggling and it's not surprising given that she's playing so much new material for the first time and she's suffering from a sore throat that she says is making her screechy. The Manchester crowd don't mind, and it's hardly noticeable either as she talks us through both new material and the old, making it difficult for anyone not on her side not to warm to her by the end of the evening.

It's a brave move to play so much unheard material, although both Higher and Trigger Bang were familiar to the hardcore fan base, the latter opening the encore sampling Giggs allowing Lily to make her reentry to a rapturous reception. However, the quality of the new material is for the most part indisputable. It might lack the bravado of the likes of Smile or Knock 'Em Out, but it reveals a more reflective, older, wiser and experienced Lily than the youngster full of bravado and not giving a shit that burst on to the scene as a fearless nineteen year old.

Lost My Mind is prefaced by an admission that she's been through a rough time since we last saw her, having gone through a divorce, bringing up her two daughters and generally losing her mind. Everything To Feel Something feels like she's willing something good to happen to her, whilst Apples is full of personal revelations, reflecting on the timeline of her marriage and linking it back to her own family life growing up, the song ending in a repetition of the line "the apple doesn't fall too far from the tree" whilst on Family Man she talks of the subject being "better off without me" but pleading "don't leave me."

There's also softer moments too, on Three she sings about her daughter not wanting her to leave to go and work, although Lily jokes at the end that it's actually a calculated attempt to get a song for a mobile phone ad. Despite the intense nature of some of these songs, she's also not afraid to pass a flippant comment, even if it's aimed at herself. Pushing Up Daisies is a wishful thought that a relationship will last into the eighties and not lose its sparkle.

The main set finishes with a glorious Fuck You with six hundred people joining in to vent their spleen, Lily telling us that the subject of the song might not be relevant any more, but it could equally be directed at Trump or May. In the encore, she finishes with two old favourites. The Fear, likewise the best part of a decade old, she introduces by saying she's Nostradamus as she muses on the nature of celebrity and the media intrusion and how it's important to be yourself, whilst Not Fair, a song about a man's inability to satisfy anyone but themselves, once again has everyone, male and female, singing along in unison.

It must be hard to be Lily Allen. Derided for being a strong woman in the times before the tide at least changed and started to slowly edge in the right direction and at times her own worst enemy, it was too easy for the press to pick at her and mud often sticks despite it being clear if you looked closer that she was fighting her own demons as well as the vitriol of others. Tonight, and on much of No Shame, it feels like she's laying herself bare, to cure herself even if no one else takes no notice. We leave wanting to give her a big hug because this is a very brave set of songs she's putting out into the world and most of it very different, from tonight's performance, to what she's done before.

Lily Allen played My One, Come On Then, Lost My Mind, Knock 'Em Out, Everything To Feel Something, Apples, Three, Waste, Smile, Cake, Family Man, Higher, Pushing Up Daisies, Fuck You, Trigger Bang, The Fear and Not Fair