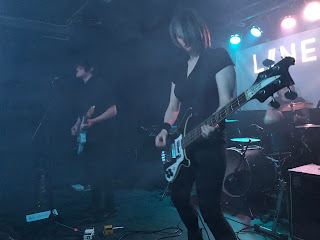 LIINES returned to Manchester triumphantly following the announcement of the release of their debut album Stop Start on May 4 with a sold-out show at Night People. A fast furious set of eleven songs from the album plus a couple of new ones sent the adrenaline flowing from the stage to the audience and back again. Support came from Lynchs.

Lynchs open up proceedings, a band that piqued our curiosity with their recent single Think Responsibly and surprisingly they choose to open to it, buoyed on by one of the biggest crowds we've seen for an opening act in a while, although they do bookmark the end of the set with their only other publicly available track, the glorious Waxwing. In between they play a set of songs that lead us to think we'll be hearing much more of them - one called Always Be This Way in particular. They grow in confidence as the set progresses, visibly relaxing as they sense the audience is getting what they're doing. They're definitely a band to keep an eye on. 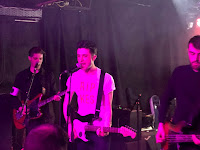 It is LIINES' night though. After a difficult 2017 where they lost bassist Steph and time was spent recording rather than being out on the road, the album announcement and the response to their latest single Shallow as well as key support from John Kennedy at Radio X including a session has meant 2018 has seen them regain the momentum that had stalled slightly. As ever they pull no punches, there's just two pedals on stage and three women armed with guitar, bass, drums and a voice that threatens to blister the ceiling and extinguish the last drops of Zoe's energy such is the ferocious force in which the words to these songs are delivered.

They start contrarily with a new song called On And On, written since the album was completed, but which possesses the same dynamic urgent characteristics of the songs that have made LIINES their name around Manchester and beyond. Their directness, their refusal to overplay or overwrite a song and focus on the core are what makes them so special. Whether it be through Zoe's breathless delivery or immaculate politeness, Tamsin's effortless cool look and the way she turns a song round in a flash and Leila's powerhouse pounding drumbeats that lift her up out of her seat at points, songs like Find Something, Hold Your Breath and Never Wanted This are somehow sparse but heavy at the same time.

When Nothing segues into Disappear the energy in the room is palpable and the noise at the end of it tells its own story about how LIINES have connected, against the odds in a town that's still dominated by four boys in a band. Be Here was a tantalising first look at the album when it was released last year, and now surrounded by other songs from the album like Never Wanted This and early single Blackout, it feels even more like the sound of a band with an unstoppable momentum building behind them.

They save the best for last though. Anyone who's not already fallen for them is forced to submit by the closing duo of latest single Shallow, two minutes of fire in the shape of music and the adieu of Never There, a song that never fails to send a chill up the spine and get the feet moving. And then they're gone, in just over half an hour they've left a clear unambiguous message that they're back to stay and mean business. Stop Start is a phenomenal record and document of a band that's forced its way from the outside in through the undeniable medium of their music.