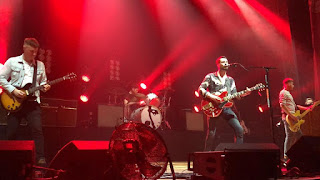 It's ten years since Courteeners released their debut album St Jude. In that time they've fought against the sneering of the London-centric music press that's either derided or ignored them in the main part and succeeded to the point where they sold out fifty thousand tickets for Old Trafford Cricket Ground last summer. To celebrate the anniversary they've announced two huge shows at Royal Albert Hall in London and Manchester Arena as well as an re-recorded acoustic Unwired version of the album. Ahead of all that though, they headed to Blackburn for an intimate by their standards warm-up show.

Liam Fray is clearly, and rightly, irked by some of the accusations of selling out by doing these shows and daring to touch the sacred cow to many Courteeners fans that is St Jude. "We could have done a whole tour, because we're money grabbing bastards" he snarls in the second half of the set, just before blasting into Modern Love, "but we've got a new record to make."  A little later he bemoans the fact that they've had magazines and radio asking to talk to them now, because of the anniversary of this record, when they've shunned them as their star has risen. "It doesn't matter about them, this is what it's about" is his retort and earlier he dedicates Fallowfield Hillbilly to those who dismissed them with a pointed "fuck them." 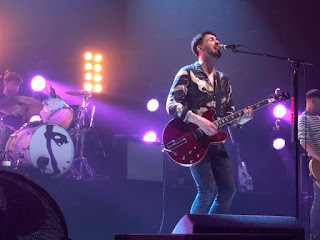 And he's right. From the start of Aftershow to the dying embers of What Took You So Long and the accompanying bellowing of the refrain, three thousand people are joined as one in celebration. At points Liam doesn't need to sing because it'd be futile as he'd just get drowned out, but he picks his moments to let the audience take over. Against the odds, and in the tradition of the likes of James (who they nod to with a snippet of Tomorrow) and more recently The Slow Readers Club, Courteeners mean the world to the hordes that are bouncing around downstairs, throwing pints, setting off a couple of flares, forming huge circles and then hurling themselves at each other. What is painfully Northern, and Liam tells us how wonderful it is to hear people sing back to him about Middleton, to those that look down their noses means everything to those that Liam's words talk to and the band's music inspires.

St Jude is played in full, but not in order, as if to make that statement. Not Nineteen Forever and What Took You So Long are saved for the big finale at the end, How Come is paired with the album closer Yesterday, Today And Probably Tomorrow plus the b-side Smiths Disco (dedicated to people who introduce others to bands) in an acoustic segment at the end of the St Jude tracks and before what becomes a mini greatest hits second half of the set. It's yet another cocked thumb to the sell-out accusations and the lazy way this type of celebration is usually performed. 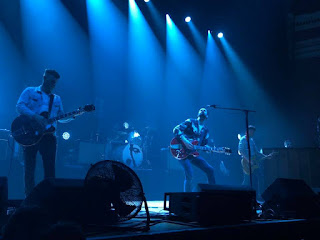 Despite the sound not always hitting the mark, nothing is going to get in the way tonight and the anger and edgy energy that flows through St Jude isn't dissipated in any way. Many of these songs were written before music was a thing to a fair chunk of this audience, but they still relate to them, sing them as if they're singing about their own lives and it's why they, more than any collection of songs they've put out since, are the ones that people want to hear most. When Not Nineteen Forever sends the place into meltdown and the refrain of What Took You So Long is still ringing in your ears a couple of hours later, it's very hard to deny that.

The frustration for the artist is always in the fact that the modern trend is to hark back to a band's first album and everything else never stands up to comparison. For some bands it's true; Oasis never ever recaptured that energy that made Definitely Maybe the defining record of a generation, but despite that they had moments where songs on their own did just that. And Courteeners have those songs aplenty, far too many to squeeze them all into the second set, but the likes of Are You Love With A Notion and Lose Control from Anna and more recent singles Modern Love and The 17th and the response to them in particular show that the well is very far from dry.

At the end, the band take the time to embrace each other individually and then go and applaud all corners of the hall, Liam stretching to shake hands with those on the balcony. Half the crowd are still singing that refrain as they do out on the streets of Blackburn in front of an excessive police presence, the rest are roaring in deafening appreciation.

This was how you should do an anniversary celebration, if you must do them.

Courteeners played Aftershow, Cavorting, Acrylic, Bide Your Time, Please Don’t, No You Didn’t No You Don’t, If It Wasn’t For Me, Kings Of The New Road, Fallowfield Hillbilly, How Come, Yesterday Today And Probably Tomorrow, Smiths Disco, Are You In Love With A Notion, Push Yourself, Lose Control, No One Will Ever Replace Us, The 17th, Modern Love, Here Come The Young Men, Not Nineteen Forever and What Took You So Long (inc snippet of Tomorrow).