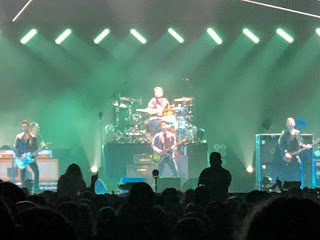 Stereophonics have become a national institution over the past twenty-odd years, these arena tours accompanying each of their now ten albums. A sold-out expectant Manchester Arena crowd were treated to a set that got the mix of old and new favourites just right across a massive twenty-seven song set.

Whether or not you like their music, there's no disputing that Stereophonics do good arena. Their stage set up is impeccable, crystal clear sound that's far from a given or easy to achieve in such a cavernous and often soulless space and there's huge bank of TV screens that either focus on Kelly's chiselled cheeks or provide accompanying visuals to the songs for those up in the Gods.

Their most recent Scream Above The Sounds might only have reached number two in the charts (compared to their six number one albums), but the band clearly believe in it, opening with two songs from it - Chances Are and Caught By The Wind - rather than taking the easy route out and starting with a big crowd-pleasing anthem, bringing in brass on Geronimo, one of the highlights of the set and with Taking A Tumble and the album's lead track All In One Night reminding us that they've still got the ability to talk to people in their masses.

It's their big anthems that do that best of course and the arena erupts as fourth song in More Life In A Tramps Vest gets the place up out of their seats. What's noticeable, unlike most bands that make it this far in their career, is their refusal to tamper with the base ingredients that won these songs such a place in the hearts of both the devoted fans down the front and the more casual follower. That song, like the others from Word Gets Around - Traffic, A Thousand Trees and Local Boy In The Photograph - brim with the same energy that they did back when they were an unsigned band on the rise packing out small venues. The same goes for their main set closer The Bartender And The Thief, played here on their James support tour in 1998 just as they were on the cusp of breaking big.

They take things down mid-set for a semi-acoustic interlude of four songs, including I Wouldn't Believe Your Radio and Handbags And Gladrags, both of which induce bouts of arm waving and singing that practically drowns Kelly out.

As they finish on Dakota, a second encore, the huge roar that accompanies the final notes, tells its own story. Whilst Stereophonics might not win any awards for innovation, their mastery of the basics and continuing ability to craft songs that resonate now and years later.

Email ThisBlogThis!Share to TwitterShare to FacebookShare to Pinterest
Labels: Stereophonics