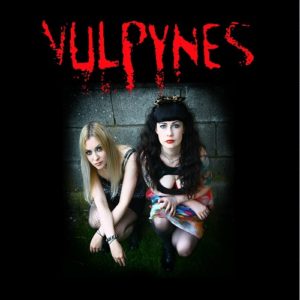 Vulpynes hail from Dublin and the two-piece have released their feroxious self-titled debut EP that seeks to capture the energy of Maeve Molly on vocals and guitar and Kaz on drums. Across four tracks that never take their foot off the accelerator they leave us under no illusion as to their intent or way of working.

First up is the EP’s lead track Sublingual and it’s clear from the offset, the loud guitars and the song’s signature riff, that Vulpynes mean business. Maeve Molly isn’t taking any messing about, asking “bitch “bitch, how are you today?” and railing about people sitting on the fence, not getting things done and settling for what they’ve got. It’s a message whose sage advice they take in the song and throughout the record. They don’t try to stretch boundaries with ambition, but their direct rough-edged assault with blunt instruments means that there’s a rawness to this that others try to smooth when actually this feels far more authentic and natural.

It’s an approach that continues on Terry Said, a riff that grabs you, drums that rise, drop then rise again while Maeve Molly tells the story of the song’s subject who “calls all the shots until he’s full of lead” whilst confusing us as we don’t know whether he’s real or a figment of her imagination or somewhere in between.

Silica is even more raw, as if they’d just plugged in without warm-ups and let loose. It’s an approach that works gloriously. Full of riffs that seem familiar but unable to be placed, it throws you around the room over the course of its two minutes and twenty seconds leaving you battered, bruised but exhilarated. The EP finishes with OCD, the highlight, full of fuzzy feedback laden guitars, a half-spoken half-sung battering ram with simple proclamations such as “I love my OCD, it doesn’t give up on me” and “times three, times three, times three, you can lick my hands clean.” Its brilliance, like what’s gone before it, is its steadfast refusal to try and impress with clever tricks, and in doing that, it impresses even more.

Email ThisBlogThis!Share to TwitterShare to FacebookShare to Pinterest
Labels: Vulpynes