Blossoms Announce New Single I Can't Stand It and Album Cool Like You .... And The Truth About That Video 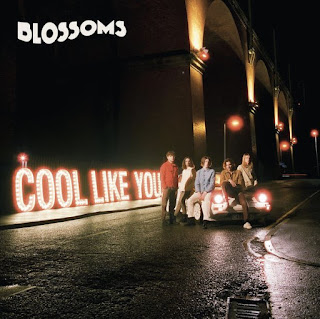 Despite rumours of them splitting up, fuelled by a video we posted on twitter the other week as well as numerous other events, Blossoms have announced the release of a new single I Can’t Stand It, the lead track from Cool Like You, the follow-up to 2016's self-titled debut that spent two weeks at number one out on April 27. They’ve also announced a series of shows to councide with the album release.

The eleven track album features There’s A Reason Why I Never Returned Your Calls, I Can’t Stand It, Cool Like You, Unfaithful, Stranger Still, How Long Will This Last?, Between The Eyes, I Just Imagined You, Giving Up The Ghost, Lying Again and Love Talk. It’s released on standard CD, LP, cassette, a deluxe CD featuring an acoustic version of the album and a CD/DVD edition that features their sell-out show from Castlefield Bowl in Manchester last summer.

So, the video. I got asked to do it as I go back a long way and they wanted someone they could trust. When I wrote for Louder Than War, I did their first ever press interview (BBC Introducing in Manchester did their first radio) at a gig at the Blue Cat in Heaton Moor back in 2014.  We recorded quite a few of their early gigs, travelled about a bit to watch them and were credited on the debut album.

So it felt like I should do it. I apologise to those who were genuinely upset by it, I didn't think it would cause quite such an emotional reaction with some fans.

Some of the responses though were hilarious and I hate to bite my tongue not to reply to some, but I thought I'd share some of my favourites :

Nonce interviewer. What sort of journalist doesn't respect a persons wishes to not be filmed?? A shit one more than likely. Hope you go bankrupt/go to prison for noncing
— T0M (@TomAcheson98) February 14, 2018

The reporters a fucking dickhead, should of respected Joe and turned it off, not keep on secretly recording, snake 🐍
— Colin Park (@ColinPark72) February 13, 2018

Shocked at the lack of ethics here.
Hoping this is a brilliant ruse to kick-start a new record. HAS to be. No "journalist" that wants to be taken seriously can be this snide, surely.
— Tim Cocker (@cocker) February 13, 2018

@eventhestarsuk if that dave lad just made blossoms split up, i’ll fuckin have him watch your back
— isobel 🐊 (@blown_rxse) February 13, 2018

Tosser snidey Fucker of a talentless jealous half witted journalist bordering on a bit of a ballchinnian who replied yes when asked if his phone recording had been switched off !
— nattam_sayin (@nattam_sayin) February 13, 2018

Just for the record, this blog is a hobby, I'm not a journalist, it isn't a job, there is absolutely no revenue made from this site, whether it be the blog itself, the social media, the youtube channel. Not a single penny and I pay for most of the gigs I review. I have a full time job that pays the bills and this is a labour of love.