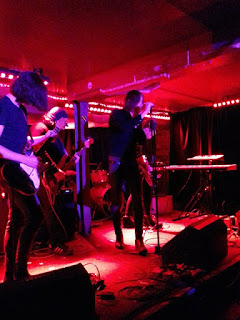 Manchester’s Purple Heart Parade visit Glasgow as part of a short Scottish tour just before their big London gig with The Lucid Dream. Stuart Ralston checks out Broadcast for the first time and is blown away by their swirling, mesmerising, psychedelic haze.

Opening with Painting Pictures, the five piece Purple Heart Parade mean business from the off. With its pounding drums and a menacing vocal, it gets a great reception from the Glasgow crowd. A beautiful new tune follows before Starf*cker Blues. With its simple, addictive riff, it is another highlight. Singer Pete prowls the stage throughout. He has a commanding presence and even treats us to the Corry theme tune as the sound engineer tries to sort out a few issues.

Pete introduces a new one from the forthcoming EP. There's so much reverb in his vocals that I can't quite work out the title (it could possibly be Lone Star) but his vocals are stunning and hypnotic. Around him, the band create the most delightful, uplifting music. It's impossible not to get caught up and swept along with Purple Heart Parade's incredibly focused, driven sound. There's nothing brash or abrasive about them yet they create this massive, swirling wall of sound.

Purple Heart Parade’s sound is destined for bigger venues than the intimate surrounds of Broadcast. Much like early Spiritualized or Verve, there's a simplicity yet intensity to their sound that's immediately infectious. We look forward to the new EP, and hopefully an album at a later date.

The A Minute's Silence At Weatherfield County  EP is available on Bandcamp, iTunes, Spotify and Amazon.

They support The Lucid Dream at London Dalston Victoria (April 5).