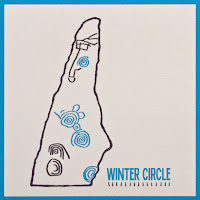 Winter Circle is the second of two singles released by Manchester's Celestial North this week. Following the release of Hey, Völva! earlier in the week, Winter Circle showcases Victoria Wood's dream-like vocals that float eloquently across the three minutes of the song.

The beauty of the song is in its simplicity. Immediately you're hit by the warmth of the music, drawing you in because it feels timeless and makes you want to hear the voice that comes in. The production is unfussy, but the captures the richness in Victoria's voice and the way she uses to express emotion more than the words alone can, aided by backing harmonies that leave you feeling a little fuzzy by the end of the song.