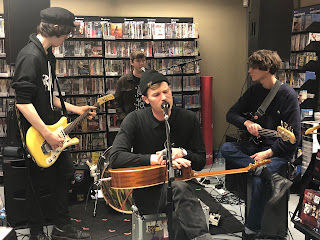 To celebrate the release of their second album Where Wildness Grows, Gengahr made their way to Manchester's Fopp store for an intimate stripped-back in-store set.

The 4pm start time passes without any sign of the band, but they eventually make it, sheepish and apologetic for having kept the crowd waiting due to traffic en route. Setting themselves up quickly, they start with Mallory, one of the singles that preceded the launch of Where Wildness Grows. In this sparse environment the song feels tender and fragile with a seated Felix's vocals low in the mix yet still recreating the beautiful expression of the recorded version.

The five-song set features three from Where Wildness Grows and two from their debut A Dream Outside. Following some adjustments to the mix, the first of them, Bathed In Light, is pared back to a swooning delicate song where you can almost hear a pin drop at the quietest points, testament to the inherent quality of the song that it can still impact with the protection of the studio or venue PAs removed.

I'll Be Waiting shows just how suited Felix's vocals are to this, as he sings "still in love with you" it feels like the most personal of confessions despite the fact we're in a brightly lit basement of a record store amongst the rows of bargain DVDs. Danny, John and Hugh also show admirable restraint in not letting loose "with all the bells and whistles" that Felix promises from their April show at Gorilla. Fill My Gums With Blood leaves us with a similar feeling before they finish the set with the new album's opening track Before Sunrise, the highlight of the five even with that gorgeous rippling riff less prevalent.

They hang around to sign albums and chat to their fans, and by our measure of success, buying the album, they've done their job with us.

Gengahr played Mallory, Bathed In Light, I'll Be Waiting, Fill My Gums With Blood and Before The Sunrise.

Email ThisBlogThis!Share to TwitterShare to FacebookShare to Pinterest
Labels: Gengahr