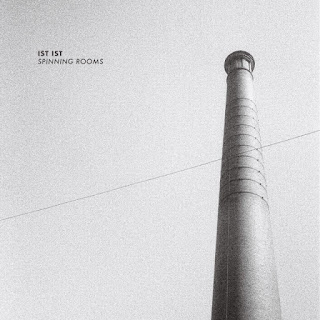 After a series of limited edition and download singles and a homemade live album, Ist Ist finally release their first official physical product, the Spinning Rooms EP, four songs and an interlude that capture the band at a point in their development from a loud raucous three-piece with two minute sonic assaults to something more controlled, but even more powerful for their ability to lock aim and target with their music.

Preacher’s Warning opens up the EP and sets the stall out for the next fifteen minutes. For those whose only exposure to Ist Ist has been those huge alt-anthemic singles in the past eighteen months, it’ll come as something of a surprise. Brooding with a slab of menacing mystery enhanced by layered echoing vocals, it takes Ist Ist off into territory they’ve not explored in public before as Adam threateningly declares “all those that come here... die” whilst at the same time pleading “give me love, give me circumvention” as the battle to escape rages.

I’m Not Here is bleak and introspective lyrically, but has a revelatory feel to it, as if it’s letting loose of demons - “I was afraid of being afraid, the room I’m in, it would spin as if I was the sun” - and escaping whatever’s causing the turmoil. The production gives the three of them space to breathe, Joel’s drums sound crystal clear whether dictating the pace of the verse or leading the song’s breakdown and controlling its ascent back as the guitars take over. It’s to their credit that they resist dousing it in something more radio-friendly and losing its razor sharp edge. It’s followed by the fifty-four second instrumental Interlude, which is just that. We’ve never really understood the point of such pieces and we still don’t.

Emily will be the one song most familiar to those who've heard Ist Ist before, steadfastly refusing to budge from their live set whilst pretty much everything else has been swept away on the band's persistent creative wave. They've resisted the urge to either turn into a big anthemic radio single or twist it round and turn it into some strange electronic track. It holds just the right level of menace, as Adam purrs threateningly as the shimmering tension of the song rises through the insistent metallic bass line and the pounding drum beats to the chorus where this untoward love song (dedicated to Adam's wife usually at live shows) gets more intense each time we come to it. By the end the listener's not sure whether to raise their arms and clap along to the powerful anthemic beat that underpins the song or to cower away as the drumming and Adam's declaration of "we're sick of crying over you" get more ferocious and the guitars ensure that there's no let up for the listener.

Diversion has been Ist Ist's set-closer at their recent big shows at Gorilla, The Ritz and Head For The Hills and it's a very fair representation of where they are as a band. Whilst it's practically impossible to recreate the impact of a dark, strobe-lit room and the sheer volume of a venue PA, they manage to ensure that this is distilled into something that still leaves us reeling. It's a song with so many ideas running through it, changes of direction, moments of tranquility exploding into violent life, both in the music and in Adam's vocal delivery where he casts off the shackles, takes a deep intake of breath and lets loose like a man possessed as the song ends in a cacophony of wonderfully coherent yet at the same time disorienting noise before stopping stone dead. Where other bands would smooth down the raw edges to create something shiny and polished, Ist Ist stand out because it's those rough surfaces that distinguish them from the rest, the confidence in the quality of what they're doing and its ability to reach an audience without compromise.

It would have been easy for Ist Ist to have sat back and churned out more of the two and a half minute blasts of noise-heavy frenzied post-punk that made such an initial impression on us three years back. But, at the risk of making their growing army of fans ratty, they’ve spread their wings here and burst out of their cocoon. They’ve delivered an EP that makes the statement that they’re not content to rest on their laurels. It’s the sort of record that bands claim to have made when they go experimental, the sort that press releases proclaim the latest bland in their roster have broken the mould with - and trust us, we read enough of that nonsense pushed by people who are more interested in being seen to be involved in music than the music itself. Yet Ist Ist have dispensed with any hint of that bluster and let their music do the talking. It’s time to listen.

The Spinning Rooms EP is released on April 6 on CD and 12" vinyl and is available to order from the band's shop.