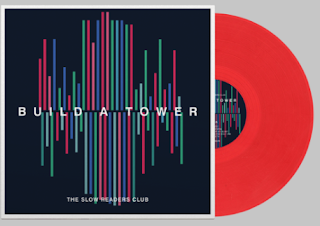 The Slow Readers Club have announced details of their third album, Build A Tower, scheduled for release on May 4th via Modern Sky. Deluxe bundles also include a live album recorded with Joe Duddell and a string quarter at Festival No 6 last September.  They've also announced a tour for April and May including a special homecoming show at Manchester Cathedral on album release date.

The album, the follow-up to 2015's Cavalcade, features last year's breakthrough single Lunatic, forthcoming single You Opened Up My Heart, two songs Through The Shadows and Never Said I Was The Only One that have been revealed live and six new songs previously unheard - Supernatural, On The TV, Lives Never Known, Not Afraid Of The Dark, Lost In Your Gaze and Distant Memory.

The live album features six tracks - Cavalcade, Block Out The Sun, Frozen, Follow Me Down, Secrets and Know the Day Will Come.

Formats and extras which be available in a range of bundles include :

Standard release CD, cassette and cherry red LP (with signed 5" and 12" inserts for CD and LP available from the band's official store)

Vinyl test pressing (30 only available as part of bundles)

Exclusive t-shirt based on the webstore exclusive LP sleeve

The Build A Tower tour calls at the following venues :

The album is available for pre-order and tickets for the tour dates (excluding Liverpool, Glasgow, Northwich and Kendal) are available now on presale at their website and on general sale tomorrow (Friday 2nd).