TRACK OF THE DAY : Pale Rider - I Run On Rain 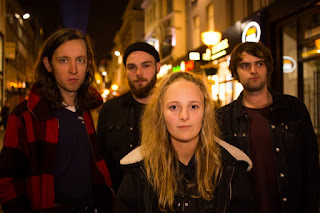 Pale Rider might only have played a handful of shows to date, but they've already got a burgeoning reputation in their base of Liverpool and beyond. Their debut single I Run On Rain is the only thing they've put out to date and now they've released an accompanying video.

Ben from the band described  I Run On Rain "The song came from thinking about lyricism, or art in general as an objective thing, and how we decide what is profound and remarkable and what isn’t. ‘Confidence in the nonsense...a meaning in the nothing’ was born from this idea. The verses are kind of like a surreal tongue-in-cheek play on this concept, and are sang with gusto and conviction to imply some hidden meaning.

"I think the video, all VHS footage from our recent escapades, are a good indication of how frenzied and deranged our stage show’s becoming."

We caught one of those early shows at Liverpool's Shipping Forecast with The Lucid Dream, who they support at Band On The Wall in Manchester on April 6th and were mightily impressed - "This is apparently only Pale Rider's third gig but you wouldn't guess that from the stunningly cohesive and uplifting five-song set that they grace us with. With a front man with a voice that can soar off into the stratosphere and drop us back down into the grime and dirt and a drummer who dictates the songs with a subtle change of pace or a brash bold explosion of power, they look set to become a fixture in the North West's flourishing underground music scene for months to come."

They play Liverpool Shipping Forecast (March 15, with Phobophobes), Manchester Band On The Wall (April 6, with The Lucid Dream) and Liverpool Sound City (May 5).