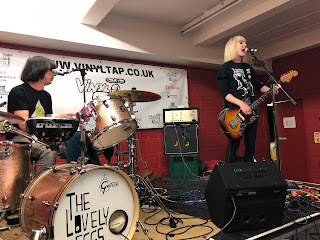 The Lovely Eggs celebrated the launch of Record Store Day 2018, including their very own “egg” version of their recent album This Is Eggland, with an instore at Huddersfield’s Vinyl Tap.

“We’re not used to playing under strip lights, it’s like a gig in a hot kitchen” David tells us half way through the set. It’s a very atypical Lovely Eggs set this, firstly no one’s pissed despite the free beer on offer, and there’s none of the arms folded blokes at the front waiting to be entertained and acting like bouncers, as Holly describes them, whilst the rows behind them lose themselves in the party. It makes for a slightly surreal environment for The Lovely Eggs are no ordinary band.

You won’t love them for their technical abilities, guitar solos or their cool look, but if you’ve read this far, I don’t think you or they will care. The Lovely Eggs are sweary, telling the kids to “go to the back and get a beer” before their final song Would You Fuck?, unpolished and defy most traditional songwriting conventions, but it’s exactly those reasons that make their DIY “fuck it” approach, one that denied themselves a Top 50 album placing, so refreshing. 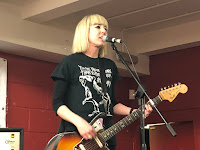 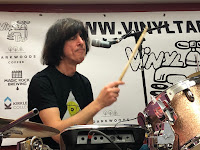 Their set is drawn pretty much exclusively from This Is Eggland. No one is really bothered about this despite a few cheers when Holly tells us they’re going to play Magic Onion, a perfect example of just how to sing a song in your accent and being proud of it. Songs like Wiggy Giggy, I Shouldn’t Have Said That, Return Of Witchcraft and Dickhead propel themselves at us under the weight of their own chaotic beats and their power isn’t diminished by these unusual surroundings and the sound man’s almost impossible task of controlling this without a desk which he pulls off well.

The Lovely Eggs are rightly proud of This Is Eggland, Holly describing it as “the best thing we’ve ever done” and in this weirdly out of context setting, supporting one of the country’s best independent record stores, it’s hard to argue.

Email ThisBlogThis!Share to TwitterShare to FacebookShare to Pinterest
Labels: The Lovely Eggs