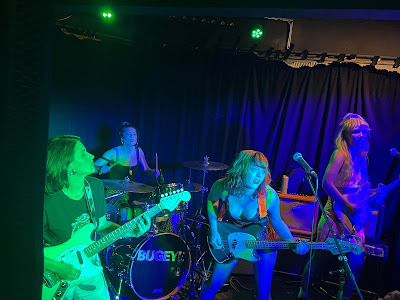 Cro Cro Land, the London-based festival, headed North on Sunday for what was billed as "a day of explosive punk, rock and indie bands celebrating female and non-binary musicians" under the As The Cro Cro Flies banner in the basement of Retro. Headlined by Loose Articles, the line-up also featured a mix of local and out-of-town bands - I, Doris and Bugeye making their Manchester debuts as well as Macclesfield's Queen Cult and Manchester's adopted The Red Stains. 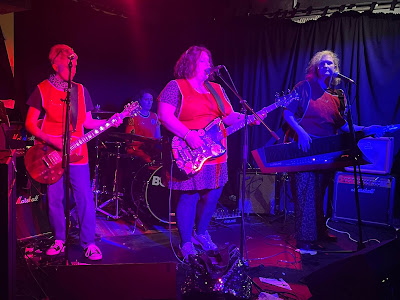 I, Doris open up the afternoon, slightly later than planned due to the unfortunate late withdrawal of Jemma Freeman And The Cosmic Something, with a set of what they describe themselves as "mummycore riotpop kitchenpunx" which takes a number of well-known songs and retells them from a female perspective. They take Squeeze's Up The Junction and turn into The Girl From Clapham by swapping the characters around. They mix their message with fun though - latest single In The Ladies is all about what women do when they go to the loo in groups on nights out and getting us all to declare that we're Doris too with a set of solemn promises - although despite the tongue-in-cheek nature of some of the lyrical content, they're very much serious musicians with something to say. 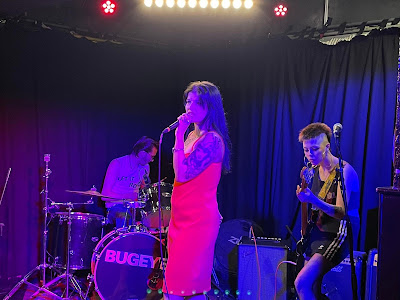 The Red Stains are now a three-piece of their original members Natalie on lead vocals, Sterling on bass and backing vocals and Ben on drums and their sound is consequently more stripped down and raw than it has been previously. This has also formed a stronger bond between them on stage and there's a real power to the combination of Ben's drumming, raw and primal, and Sterling's spindly cutting bass lines that had previously been masked by synths. Add in Sterling's backing vocals which come to the fore, adding to Natalie's unmistakable lead vocals and it's a significant transformation in their sound out of adversity. The raw anger in Natalie's vocals, the fuck you I won't do what you tell me attitude, comes right to the fore and as she jumps out into the audience and takes a seat at the back during an extended instrumental break in Smile, you sense that's going to take them far. 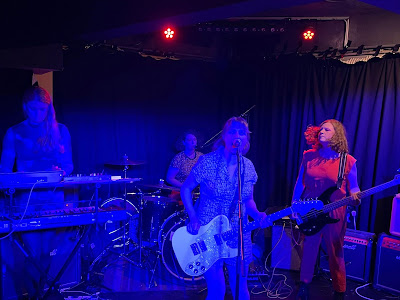 This is somehow Bugeye's first gig in Manchester and their set takes heavily from their Ready Steady Bang album that came out in 2020 but which, for obvious reasons, they're only now touring. Their live set really brings the songs to life and it's impossible to not be drawn in by the infectious energy they create. At moments Angela looks lost in the moment, in the music that her band mates (Paula on bass, Robyn on keys and Kerrie on drums) as she delivers the vocals to the like of When The Lights Go Out, Electric and Shake And Bake. Emily's backing vocals give the songs a real lift and additional punch and power and we find ourselves involuntarily moving along to them even though we're not familiar with most of them and looking around so are most of the others in the room. 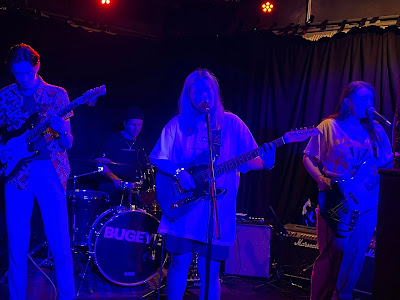 Macclesfield's Queen Cult are the penultimate band on the line-up and they once again up the energy levels in preparation for our headliners. There's a point where they're bouncing up and down as they play that makes our knees creak just watching them, but like all the bands on the bill there's a real joy to watching them deliver a set of powerful songs that are making statements about the issues that face women in society today. Show & Tell and A Song About Consent from their recent EP Woman That I Know are particular highlights as is a new song they tell us is called Sticky Freak. They finish with a cover of Anastacia's Left Outside Alone which mashes in a little of Rage Against The Machine's Killing In The Name Of and is done, as covers should be if you have to, by making it sound like one of their own songs. Maisie and Leila's vocals combine well throughout the set and their on-stage interactions add a little humour to proceedings as well as they joke about forgetting their merch and out-of-date QR codes and being unprofessional. Where it matters though - the music - there's no such reservations. 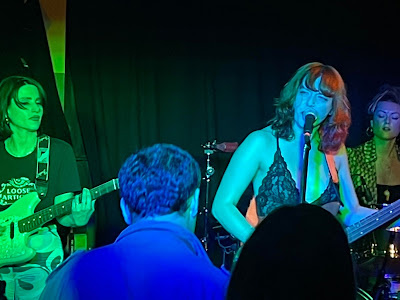 Loose Articles finish off the evening, after having spent most of the day in the front rows watching the other bands, one of the best aspects of this mini-festival and a lesson to all bands to support each other. Their set is the fast and furious chaos that's made them one of the most exhilarating bands to watch right now taking in most of their released tracks to date - Buses, Kick Like A Girl, Snake, Up The Disco, Lethal Weapon and current single Chaos, where Erin takes over lead vocals. A couple of unreleased tracks - Dirty Dicks and a brand new one Beer, about preferring a beer with your mates than hanging around with blokes - complete the set.  Everything starts from Louise's powerful drumming, the frame on which everything else is hung and Natalie is a real tour de force at the front of the band, he facial expressions living out every word of these songs, ending up out in the crowd with us during the aforementioned Beer as if she's one of us. And in many ways Loose Articles are just that, four mates who decided to get on stage and form a band together because others were doing it and, newly signed to influential indie Alcopop, they're set to make their own indelible mark.
I, Doris are on Facebook and Twitter.
The Red Stains are on Facebook, Instagram and Twitter.
Bugeye are on Facebook and Twitter.
Queen Cult's website can be found here and they are on Facebook and Twitter.