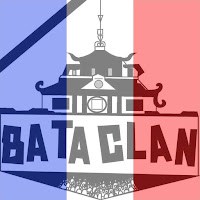 I'm not sure whether this is any way appropriate, but I feel compelled to write about the events that enveloped Paris on Friday night.

As I lay in bed in the early hours in Saturday morning watching the horrific news unfold on TV, I cried for the first time since my father died twenty five years ago. I'd been at a gig earlier in the evening in a venue a similar size to the Bataclan, where I'd seen a few shows when I worked in Paris, and the news started to trickle through as the band were on stage. Stood near the back of the hall, I turned to look at the door, patrolled by five or six Showsec personnel, who would have been as powerless as those poor souls that were guarding the Bataclan doors.

In a different time and place what happened there could have happened to us, or anyone who was at a gig that night anywhere in the world. It appears that Nick Alexander, the merch guy for Eagles Of Death Metal, was one of those that didn't make it through. When his face was posted, my heart froze as I recognised his face. I didn't know him, but like so many women and men who work the gig scene, you know them even if you don't know their name.

Saturday night, I'm in Sheffield for Reverend And The Makers, I walk into a venue for the first time and it feels weird, something has changed, as if that sanctity, that place where you lose sight of everything that's wrong with the world to be lost in music for a couple of hours, felt threatened. I choose a place to stand that's close to an exit.  I'm not sure how many of the crowd feel the same, but the gig itself is a big fuck you to anyone who wants to think they can strike fear into us. We will continue going to gigs, we owe it to the ninety people who died doing just that on Friday night, it might not change anything but it's the only way we know good will win over evil.

There's evil all around the world. There were attacks in Beirut in the same twenty four hours with equally devastating consequences yet Paris hit home more than any terrorist attack has ever done - even the London bombings. Yet there are people out there who seem to think that being upset and scared at something that happened that feels so close to home isn't just that but a selfish ignorance of what's going on in the world. There are good and bad on all sides of every fence, people who hate anything that's different to them and those that believe their own self-righteousness, whether it be fanaticism or liberalism, makes them in some way superior. This war we're fighting is about good versus bad not black against white, Christian against Muslim, yet people with self-interest and people not intelligent enough to see through that will make sure that message isn't the one you'll hear the loudest.

I've seen quite a few posts around criticising people for highlighting the attacks in Paris and not mentioning the equally horrific events in Beirut and Kenya, criticising people for changing their profile pictures because it's not going to change anything and that it is in some way anti-Muslim.
Let me get one thing straight. My change of profile picture is about showing respect for people who died doing something I love, that I was doing at the time the news of the events in Bataclan started to filter through. The news coming through would indicate that people have died doing jobs that people I know in real life do every day of the year to make these events happen. It happened in a venue where I've seen gigs in a city that I've spent a lot of time. It has nothing to do with valuing those lives any less than those in Beirut or Kenya or wherever else.

It also does not mean anyone thinks all Muslims are terrorists or even that they support what these animals claim to be doing in their name. These people are not representative of a religion, just using it to justify their ends and their means, just like the IRA didn't represent the views and will of all Irish Catholics or the Nazis the Germans. Neither does it mean we should be doing any less to help the poor people who are fleeing this happening where they live and are desperately trying to escape it - seeking refuge from a situation that the west arguably created and indisputably has exacerbated.

Telling or insinuating that me that changing my profile picture to show respect to people like me who died doing what I love most in life means that I somehow don't care about those that died in Beirut or Kenya or wherever else in the world these atrocities are happening is frankly insulting and condescending and you can fuck off and delete me now.

Similarly, if you share the beliefs being shared around that these actions represent the majority of Muslims and that we should turn our backs on those desperately fleeing IS in the Middle East, you can also fuck off because I don't class you as or want you as a friend."