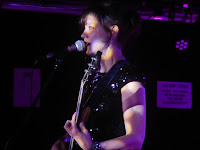 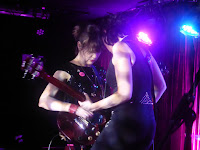 Ex Hex returned to Manchester for the second time this year to the Ruby Lounge and thrilled us with tracks from last year's Rips and a set full of hooks, riffs and more power than you could imagine from a three-piece.

What's most astonishing about the sound Ex Hex create is for the most part you wonder how they're actually doing it. It all looks so effortless, to the point where they're not even looking what they're playing most of the time, so in control, yet the squalling guitar and bass colliding when they take Beast off into an extended middle section is the loudest most exciting coming together we've heard for a long time.

There's a telepathic understanding between Mary and Betsy whether they be strutting the stage oblivious to each other, lying on the floor, standing on the monitors or the multiple times they come together mid-stage playing inches away from each other. At times the rhythm section of Betsy and drummer Laura is so fierce, so confrontational yet, like most great music that centres around an electric guitar, you can't help but want to dance to it as well. The vocal interchanges between Mary and Betsy with Laura on backing vocals works fantastically well throughout adding depth and dynamism to the sound. 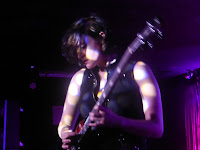 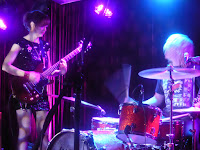 They play the whole of Rips with the exception of You Fell Apart and the album really comes to life in this environment, as if it were made to be played live. The likes of Radio On and Waterfall remain true to Mary's garage roots but with a hint of something more playful poking through, perfect three minute songs with a caustic edge that draw you in and don't let you go. As the set progresses the songs get harder and faster, the amps get cranked up and the snaking rhythms that drive them get more fluid and louder.

Visually they keep the audience on our toes too, in some parts exuding diffident cool, in others so lost in what they're doing we might as well not be there. Betsy takes over lead vocals for some songs, Mary joins Laura behind the drums at one point leaving her centre stage to let loose. They don't say much between songs other to tell us how nice we all are, but the music does the talking for them. They're having the most fun up there on stage and that transmits to the crowd as well.

By the end, like the rest of the crowd, we're blown away by the intensity of what we've witnessed. There's no show, no big statements being made here, just the sheer power of the music creating a wave that lifts everyone in the room up, spins us round and leaves us staggering out slightly dazed, enthralled, ears battered and bruised but with a warm glow that tells us we've witnessed a great band doing what they love the most.

They finish their UK tour with a show at Bristol Thekla tonight.