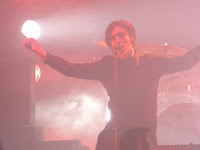 It's been a meteoric rise for Catfish And The Bottlemen in the last eighteen months, going from the Night And Day to selling out two nights at the Apollo in half a morning. It's a daunting prospect playing to 7,000 people armed with just one solitary album, but it's another move that they take effortlessly in their stride as we witnessed them triumph on the second night.

There's a lot of bad things written about Catfish And The Bottlemen in the past year. Mostly petty and jealous around their rise when other bands that people view as more worthy or simply better continue to struggle to get an audience, they deride the fact they're linked to Mumford and Sons' label Communion inextricably linked to the biggest record label in the world and that Van McCann makes no secret of his desire for Catfish to be the biggest band in the world, as if wanting your music to be heard and loved is some sort of crime against cool. They ignore the fact that Catfish worked hard for years for little reward and, perhaps yes, they might have got a lucky card drawn in their hand, but that doesn't explain the adoration, the euphoria and the sheer emotion they generate tonight.

Since we last saw them at The Ritz last year, their juggernaut has moved on. It felt then they didn't quite fill the place, that they were a little uncertain of the surroundings they'd found themselves in. A year or so later, still with pretty much the same set, they own the Apollo and it feels like they belong in here and undoubtedly even bigger arenas very very soon. From the front row back past the sound desk and we suspect up on the balcony too, everyone is up dancing, jumping and singing back every single word of every single song to the extent that at points Van doesn't need to.

Somehow, somewhere, Catfish And The Bottlemen tapped into a vein, ruffled feathers and tuned into the wavelength of thousands of teenagers and twenty-somethings. These songs - Rango, Pacifier, Homesick, Kathleen, 26, Business, Cocoon - talk to people in a way few bands ever manage to and which many can't explain or dismiss as some form of lower common denominator, but if that fraction is making people happy, making them forget their cares for an hour and the guy up on the stage is singing about issues that they can relate to and they can look around and see the same reaction from thousands of others, then that's something magical. 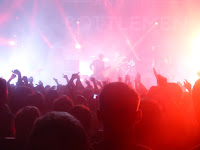 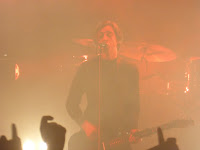 They keep it simple too, because sometimes simple is exactly what music should be. Art-school leanings and beard-stroking musings have their time and place, but sometimes all you want is full on rock and roll, head down, straight to the point and Catfish deliver this in spades. A phenomenal light show that emphasises the band at the just the right moments accentuates the effect, full on white light beams straddling the stage and crowd when the volume is cranked up and more modest in the less frantic moments. The rest of the band leave the stage as Homesick finishes and Van leads the crowd in a refrain of the tag line before performing Hourglass acoustically on his own with his choir of urban angels as backing vocalists.

To swerve the obvious issue of only having one thirty-five minute album to their name, Business is twisted and stretched mid-song without diluting its impact and set closer Tyrants stops and then crashes back in as they soak up the adulating response of the crowd to whip them back into one final frenzy. The amount of time they've spent on the road, and they're a big deal in the US and further afield as well now, has meant that the challenge of producing a worthy follow-up has been put on the back burner, but they do debut one new song called 7. It doesn't blow us away, but it also doesn't feel out of place either and given what's going on around it in the set, that has to be seen as a success for now.

We've lost the moments where we could look Catfish in the whites of their eyes as we watched them move step by step through the venues of Manchester (and everywhere else), each one bigger than the last. The songs we jumped around to in the Night And Day or the Ruby Lounge have grown wings, and beefed themselves up for their new surroundings. Yet they're still a band of the people. Looking around tonight, this band and these songs mean the world to the people around us (we witness tickets changing hands for a hundred quid outside) some of whom are falling in love with a band for the very first time.

Whatever you may think about them, this is what music exists for.