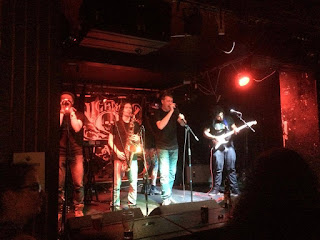 The cold nights are drawing in up north and the Manchester music scene seems to be a distinctly winteresque feel to it. Mainstream hitmakers have aged, the last crop of nearly-made-its have gone and the most austerity-hit Mancunia can look forward to is a tired string of comebacks from bands that have nothing new to say. And, yep, its raining. But despair not, My Igloo are determined to bring a freshness lacking on the scene and are making a stir wherever they play. On this Saturday in November as storm Abigail raged outside, the band, now an impressive seven-piece, played their first headline gig at Night and Day. Our guest reviewer Louie tells us more.

The venue itself has seen better days; the widespread community support it gathered when a local neighbour's complaints threatened to pull the plug on live music is done no favours by the high price of tickets and drinks. Nevertheless, Night and Day is a location always capable of generating an atmosphere – provided the bands on show are able to do it justice. This time justice prevailed. My Igloo mix psyche-pop with jazzed-up reggae. Some of their hooks are terminally infectious and the lyrics offered by Greece-born keyboardist Andy Livanis are often wry and cutting.

My Igloo band members are a dream team of Manchester’s unsung heroes, cut from the leftovers of Frazer King, Greetings and Little Engine and others from the mostly Wythenshawe- and Chorlton-dominated group which has electrified audiences (if not the industry fatcats) in recent years. Lead singer Tony Boardman is a veteran, cutting his teeth in indie before becoming known as a vocalist with a fetish for harmonies. As a frontman, he's no Axl Rose – shaking tambourine rather than snakehips. But this band is not about individual egos. The players contribute in a kind of democratic way that makes the sound what it is. A collective effort. The beating heart comes from drummer Matt, silly hat wearing bassist Nick and new boy Callum on guitar. Keys and backing vocals are counterpointed by trumpet, from another Nick, and a temp tenor sax player (they need a permanent one).

The set begins with Peace, with a lazy kind of vibe that builds suspense and the expectation that the band could explode into salsa-ska at any time. Dinner Hour has us on edge. The opening lyrics, 'Child suicide rates, Sat around dinner plates, The man has a plan, Its diazepam' highlight the warped genius of Andy Livanis whose own experience bears witness to what he writes about and gives it to you with razor sharpness. Livanis was the orchestrator and agent provocateur of Frazer King, leaving his stamp on the group long after he left and on the musicians that have gone their separate ways to do new things. He got his mates into Zappa and Beefheart and the kind of jazz your grandparents would shout at.

A song called Garden asks the reasonable question, “Who are all these plastics selling sex as tactics?” with horn and vocal harmonies that are nothing if not sexual. Do Be Dum and other Igloo tunes stamp this band's pop excellence. Watch Out, with its rousing “na na na” chorus (I know right, I'm still skeptical but the crowd love it) brings the rawness out in Boardman's vocals and brings the show to a climax. The Wythenshawe/Chorlton axis is alive and kicking. And My Igloo give a hint that there is more to come.

They support The High at Manchester Academy on December 13.

Follow Even The Stars on Twitter at @eventhestarsuk and like our Facebook page for all the latest updates.  The views on the Night and Day are those of the writer and do not represent the views of the editorial team.
Posted by Even The Stars at 08:15