Track Of The Day : Meilyr Jones - How To Recognise A Work Of Art 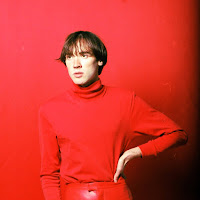 How To Recognise A Work Of Art is the new single by Meilyr Jones, former front man of Race Horses. The track is the latest to be drawn from his album 2013 which is due out in 2016. The song takes a cynical view at the world of art collectors, but it's couched in uplifting brass and a melodic and insistent riff that's infectious and will draw you into the song.

It starts off like the bastard brother of The Stone Roses' She Bangs The Drums and Pulp's Disco 2000, but from the minute Meilyr starts to sing it's very much his own. It's a sign of his diversity of ambition that this song sounds completely different to previously revealed tracks, the piano ballad of Refugees and the unsettling faux-electro-country tints of Don Juan. It's bullish, ebuillent and full of fun and a song that charmed audiences on his recent support slots with Richard Hawley.

2013 was mostly written and recorded around the time of the demise of the fantastic Race Horses and two albums which won them critical acclaim, but struggled to make a commercial breakthrough. With the support of Moshi Moshi and a growing live following, we can hope that the solo career will take a different path and if How To Recognise A Work Of Art is a taster then things look good.