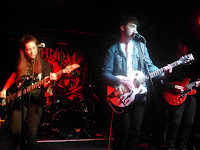 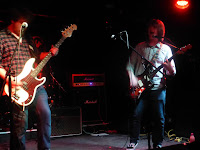 Lunar are another promising young band on the Manchester scene that are making their mark by standing out from the crowd. They headlined an SSR curated evening at the Night And Day and we went along to check them out. Support came from Mexicola.

Mexicola hail from Wigan. They tell us no one ever cheers at that. They have a neat line in between song patter and they need it because they take forever to tune up, but when they do start playing they're a full-on trio that create something that grabs your attention and doesn't let it drop. Their songs are big loud and in your face, but with a sense of humour and shards of melody protuding through. Down And Out and Dim particularly impress us with their vigour and boundless energy.

Lunar have been relatively quiet since they sold out Sound Control to launch their single Our Way and it's immediately evident how much they've developed as a band since then. Front man Sam Carson is a much more confident leader of the band now, he's projecting his vocals further and on his way to fulfilling the raw potential that those who've seen Lunar's fledgling gigs had identified. Opener Come Home feels more and more like a full-on single with every listen as a result.

He's more than ably assisted by bassist Christie who doesn't stand still all night, mouthing along to the words when she's not combining her voice with Sam's to lift the likes of Gonna Get You Down and Showboater. That mix of male/female vocals is so rare around Manchester at the moment, but it adds so much to the songs where they use it. Guitarist Luke shows a range of style and depth to his playing that belies his years as well making the songs sound as big as those of more established bands. 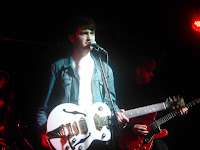 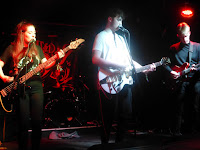 Their debut single Our Way sounds ever more the surefire hit single with every play, an insistent verse, a driving guitar riff and a chorus that's perfect for joining an audience together in unison to sing along. They finish with a cover of Faithless's Insomnia but make their mark all over it, stamping their own mark on it without losing the original.

The one disappointment is the size of the crowd. For a band with so much promise they seem unaware of the whole social media game they need to play. When they did it for Sound Control people flooded out to see them and loved them - sadly these days being a great band isn't a guarantee of success, it's what you do when you're not playing that almost counts as much. It'd be a shame to see natural talent go to waste.