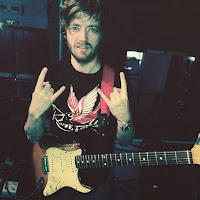 Happy Now is the debut single from Dom Major and what a way to announce your entrance. It's a raw blues-infused rocker that sets its sights high from the minute the song's signature guitar riff kicks in.

It sounds like nothing else that's coming out of Manchester at the moment. The production on Dom's voice, making it sound imposing and sandpaper rough as he declares in the chorus "So don't tell me that you're happy now. Cos it ain't what I want to hear", adds to the impact of the guitar.

We've also been given a sneak preview of an acoustic version of the track, stripped back to its bones, that sounds like a completely different song.  Dom plans to release an EP including Happy Now in the New Year, and if this first taster is anything to go by, it's going to be one that'll build on his growing reputation around town and beyond.