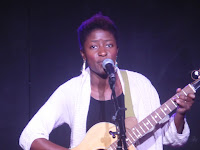 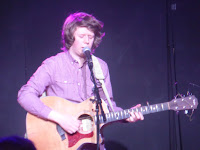 The latest in the series of free entry SFX gigs at Manchester's Royal Exchange Theatre saw a double-header of James Holt and Josephine charm the audience with solo sets.

Opening up proceedings is James Holt and this is the first time we've seen him play and we're impressed by the intensity of his performance and the crafting of his songs. Alone Again And Always is a perfectly fragile and tender tale, whilst What Happened To John?, which was picked up and championed by Brian Eno, packs a stronger punch but without deviating from Holt's painstaking and meticulous construction of his art. It's his fifth and final song Butterfly (he doesn't introduce any songs by title so we're guessing) though that particularly stands out for us.

Josephine charms us immediately. She tells stories of strange scenarios for her videos, jokes whether her working on an arts project at a different theatre is a conflict of interest with her set, but of course also with her music. She mixes old songs from her debut album Portrait, starting with the title track, with new songs that she's not yet released.

It's one of the new ones Human, about the need for people to interact in person rather than on social media that's our highlight, opening with the brilliantly observed "I have a thousand friends on a screen, I take them everywhere with me, I tell them everything" before stressing the need for proper contact. Another track, Outdoors, is from a project she's working on with students from Salford University, also stands out along with a second new song, the love-sick Desert Without A Stream, with which she closes the set.  Her voice is as evocative as ever, accentuated by only being accompanied by an acoustic guitar and the reverent silence the audience grant her.

The songs from her debut album have also aged gracefully, the aforementioned title track retains its irresistible charm whilst A Freak A skips merrily from bar to bar and is a whole barrel of fun. Josephine is one of Manchester's best kept secrets, but one that these new songs will hopefully help reveal to the wider world.