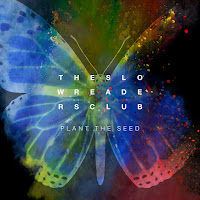 The Slow Readers Club are releasing a new single Plant The Seed from their 2015 album Cavalcade. Tucked away on the digital b-side is a rather cracking remix of previous single Don't Mind by the fabulous Lake Komo taking time out from building themselves a reputation as a band to keep a watchful eye on in 2016.

We're not huge fans of remixes 99% of the time, but every once in a while we'll catch one that grabs one and Lake Komo have done a fantastic job of both translating Don't Mind to the dancefloor by pinning it to a swirling beat and lifting and echoing Aaron's vocals to great effect as well as remaining true enough to the original as to not to alienate The Slow Readers Club's growing fanbase.

The Slow Readers Club are on a UK tour to support the single including shows at Leeds Packhorse tonight (Nov 20), Liverpool Magnet (27), a sold-out hometown show at Manchester Gorilla (28), Preston Mad Ferret (December 5) and Glasgow The Classic Grand (12).

Lake Komo have released two singles in 2015 - Think Tank and Ritual - and are readying new material for release after signing a deal with Columbia Records. We caught the Lancaster four-piece supporting Hidden Charms at Gullivers on Monday night.

Lake Komo's website can be found here and they are on Facebook and Twitter and you can listen to their two singles to date on Soundcloud.