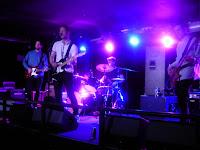 Mayflower are one of a group of new bands in Manchester that excite us greatly. Still early in their life, having only revealed four demos to us, there's something about them that hasn't fully revealed itself just yet that suggests they're set for bigger things. We caught up with them playing at the Ruby Lounge and left convinced that our gut instinct will be proved right.

What's immediately obvious, despite some issues in the first two songs due to the lack of the soundcheck, is that Mayflower have a stash of great songs. Whilst never sounding the same they possess the same qualities - dynamic driven guitars and delicious backing vocals and harmonies that lift the listener up and allow them to lose themselves in the music, whether it's on Gretna Green or the more subdued Many Clouds that shows they've got the ability to vary the pace when needs require.

They start with three songs that we'd not heard before - BRJ, the aforementioned Gretna Green and Peaks - before concluding with that foursome of songs that have piqued our attention - The Dice Man, Many Clouds, Sienna and their closing track Rapa Nui . Live, they sound slightly harder edged than on those demos without losing the beautiful melodic qualities that drew us in on Sienna and The Dice Men, songs that brim with intent and lay down a marker. They're not afraid to tug at your heartstrings, they don't try and impress you with experimentation because they know the timeless value and unquestionable power of a great song. 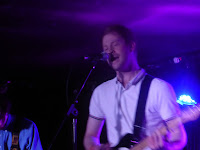 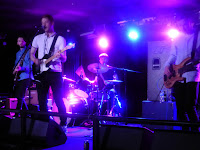 The Ruby Lounge crowd can be a notoriously difficult one given the layout of the venue creating a natural separation between bar area and live space that means bands can often be playing to a handful of people when it's quite full, but as Mayflower's set progresses more people make their way across and the reception they get at the end of the set tells its own story. Mayflower won't bowl you over with noise and power, but will employ more subtle tactics and seduce and charm you into submission.

Email ThisBlogThis!Share to TwitterShare to FacebookShare to Pinterest
Labels: Mayflower