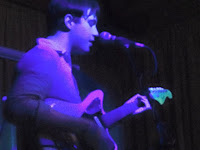 A jokey cry of "Judas" goes out as Jo Rose makes his way to the stage with his band. A regular and much-loved member of the Manchester acoustic scene is finally going big with a band and Gullivers is packed to witness him transform songs that we've become accustomed to in fragile delicate form transformed by a six-piece band.

Jo's set focuses around his album Spurs from which he plays eight of the nine songs as well as three new songs Glass Arcade, Mustanging and Easier For Giving as well as finishing the set in the audience with an unplugged cover of Big Star's Thirteen.

He's recruited Jo Dudderidge of The Travelling Band on keyboards, Mancunian pedal steel legend Chris Hillman, Pete Mitchell on drums, Jim Rhodes of Cherry Ghost and Aidan of support band Oh Man The Mountains (who we missed) on guitar. There's plenty of great backing vocals including two songs where Klara from First Aid Kit joins them on stage. So he's got an established set of musicians playing with him in this band format. 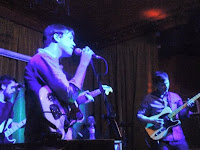 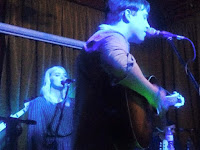 The songs blossom in the full band setting. There's country edges to some of them, at points he and the band let loose and the songs have a much harder and darker edge to them than we've ever heard before, but they always come full circle for us to appreciate the quality that's in the DNA of every one of these thoughtfully intelligent songs and the craftsmanship with which Jo and his band deliver them. Unusually for Gullivers, with the exception of one drunken woman who barges her way in half way through, songs are met with complete silence, particularly in the most intimate moments of the evening's proceedings, testament to the spell under which Jo and his band hold us.

It's hard to pick out highlights of the set, but Mustanging seem to suggest that Jo is starting to inject more fun into his new songs rather than the intensity of some of the tracks from Spurs but without losing that quintessentially English charms that pervades through all his work today.  When his voices combine with Jo and Aidan's the songs are lifted and when Klara joins in there's a beauty that only the combination of perfectly atuned male and female vocals together in harmony can create.

The evening is an unqualified success as a first live outing with the band and we hope that Jo now mixes together these types of shows with those wonderfully intimate solo outings. It's testament to the endearing quality of the songs that they work equally well in both environments with different treatments and to Jo's development from a shy nervous solo artist into someone who looks and sounds fully confident and at home leading a band.